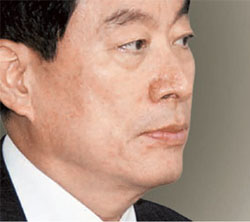 The former spy chief under the Lee Myung-bak administration was banned from overseas travel on suspicion of swaying voters in favor of the ruling party candidate during last year’s presidential election campaign.

The Ministry of Justice placed an overseas travel ban on Won Sei-hoon, ex-chief of the National Intelligence Service (NIS), sources told reporters on Saturday, after the prosecution launched a probe into allegations that he ordered NIS officials to manipulate public opinion ahead of the December election.

According to the NIS, Won was supposed to depart for the United States yesterday, three days after his retirement, and start his new career as a researcher at Stanford University.

Three liberal associations - Korean Confederation of Trade Unions, Korean Teachers and Education Workers Union, and the nationwide association against the four rivers restoration project - filed accusations against Won on Thursday, on suspicion of violations of election law, abuse of power, intervention in domestic politics and libel.

Under the law, the spy agency is prohibited from any involvement in domestic politics.

The associations said in a joint statement at a press meeting on Thursday that Won allegedly ordered his spy agents to write some comments or posts supporting the state-run projects by the Lee administration and then-ruling Saenuri Party’s presidential candidate Park Geun-hye, particularly on Web sites that young voters visit frequently.

They also claimed that Won tried to libel their associations as “pro-Pyongyang” and ordered agents to pressure the then-administration to punish them, which they called “a violation of the current law” and “anticonstitutional acts.”

The opposition Democratic United Party also argued Won was trying to avoid the prosecution by leaving for the U.S.

Jin Sun-mee, a DUP lawmaker, and other party members convened a joint press meeting yesterday at the National Assembly and said Won “attempted self-imposed exile as soon as he retires” in order to avoid an investigation.

Their accusations came after the liberal Hankyoreh newspaper’s report on March 18 that alleged that Won gave NIS officials such orders at daily meetings, and the officials posted his order every day on the agency’s intranet in order to remind the agents.

At the time, the agency denied the allegation. It said Won had ordered NIS officials to keep their political neutrality and respond to “groundless rumors through the Internet.”