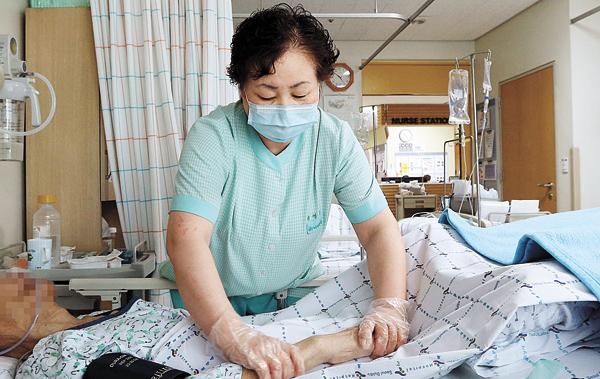 A 62-year-old lung cancer patient surnamed Lee, who lives in Seoul, spent a considerable amount of time looking for a caregiver.

It was not an easy search for him as he was in the final terminal stage, for which many “private caregivers” are reluctant to provide service.

After months of searching, Lee finally found a caregiver, whom he pays 2 million won ($1,786) per month to take care of him.

This is twice as much as Lee pays for his cancer treatment, which is 1 million won per month.

For another patient surnamed Jang, a 82-year-old patient suffering from a stroke, the financial burden stemming from the caregiver service mounts day after day. Jang said he has spent 260 million won in the past year on employing a private caregiver, which is 6 million won more than he has spent on his treatment.

An increased number of patients are feeling burdened by the growing costs for caregiver services, which is not covered by the National Health Insurance and is not included in the nursing service that general hospitals provide. In Korea, a caregiver takes care of a patient in a hospital room by keeping them fed and cleaned and taking care of other basic needs, but the caregiver is not a licensed nurse.

Hiring a caregiver is a private contract between two parties, a patient and a service provider, and thus is outside of the insurance coverage area, adding financial pressure to patients and their families. Especially for families of patients with a history of strokes, which often impairs patient’s physical abilities, paying for the care service is one of their primary concerns.

The wife of an 80-year-old patient who suffered a stroke said it costs her family 2 million won every month for caregiver service.

The wife, who asked that her name not be disclosed, said her family decided to discontinue the service because of the mounting fees.

A private caregiver service outside of a hospital’s provided nursing service can only be found in a few countries such as Korea and Taiwan.

“In the United States and Japan, the caregiver service is part of the general hospital nursing programs provided for patients,” says Kwon Yong-jin, head of Seoul Bukbu Hospital.

“It is due to the shortage of human resource and capital [for the caregiver service] that a patient and his or her family are solely responsible [financially] to be taken care of by a caregiver.”

The financial problems stemming from the uninsurable caregiver service are particularly acute in Korea, as over eight in 10, or 88 percent, of long-term patients, such as those with dementia, privately hire caregivers, according to a study by Prof. Ahn Hyung-sik at the college of medicine at Korea University.

It is estimated that in 2009 alone, around 3 trillion won was spent by patients for caregiver service, meaning each patient who used the service was charged with 2.75 million won per year on average.

For a patient under acute medical care, it now costs between 60,000 to 80,000 won per day to hire a private caregiver. Those under acute care who cannot afford to hire caregivers are most often taken care of daily by family members. In recognition of mounting financial woes experienced by patients and their families over uninsured caregiver service, the government is mulling options to reduce the burden.

“The discussion to include the caregiver service within the nursing service is now under way,” said Lee Chang-jun, director of the medical policy team at Ministry of Health and Welfare. Starting in July, the government will begin a trial service with a 10 billion won budget for the inclusion.

It is estimated that providing the caregiver service through a hospital nursing program rather than through private contracts will require 120,000 new laborers in the nursing service and cost between 3.3 trillion to 7.6 trillion won.

Prof. Heo Dae-seog of the internal medicine department at Seoul National University’s college of medicine proposes expanding the national health insurance coverage to cover the caregiver service while limiting its scope in other treatment areas.

“Rather than spending state insurance funds on expensive cancer medicine, diverting the funds to cover the caregiver service is urgently needed,” said the professor.