A new task has recently been assigned to officials from Gimcheon City Government in North Gyeongsang: visit Gimcheon University three times a week and encourage the university students to designate the city as their permanent address.

They’re targeting a flock of freshmen who come from other cities such as Busan and Daegu to study.

For each student who agrees to register the new residence as their permanent address, the district office will reward the student 200,000 won ($179) in return. 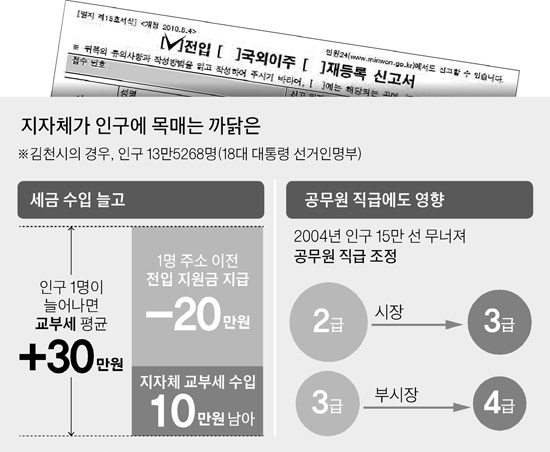 Some district offices in Korea - especially with relatively tiny populations - go all out to grant financial compensation for simply being transferred into their administrative district.

The underlying aim is to generate more registered residents so that a local government can gain leverage when competing against other districts for funding from the central government.

The city managed to register more than 1,000 new residents, including 150 college students last year, which means that approximately 200 million won has been spent from city coffers.

Along with the first year students, teachers, firefighters and police officers - anyone with a job that necessitates frequent relocation - are attractive targets, making fire and police stations another destination for the officials.

“This year, we aim to have 150 students registered by May,” said Jeon In-jin, head of the Daeshin-dong office in Gimcheon.

Such cash incentives are not in violation of the law if a local government sets up a relevant ordinance that allows the spending.

Accordingly, different small cities and counties - including Wonju in Gangwon, Yeongdong-gun in North Chungcheong and Yeongju in North Gyeongsang - are on the path to follow suit.

The city of Daejeon has devised a range of their own incentives to turn potentially short-term residents into its constituents.

Located one and a half hours by car from Seoul, the city of 1.5 million has seen a consistent growth in population, but Daejeon expects the population to shrink with the arrival of Sejong City, a planned administrative city designed to house government offices and workers.

Some of Daejeon’s research institutes and South Chungcheong Provincial Government are scheduled to move into the new administrative district, worrying Daejeon city officials about a possible population drain.

As one of Korea’s major metropolitan cities, Daejeon has many students to appeal to, including 19 colleges with about 160,000 students. The city officials are specifically targeting 10,000 dorm dwellers.

Some might think the municipalities have gone to an extreme, but they appear to have a reason behind the desperate efforts.

The number of residents determines how much shared taxes a local government can secure from the central government and the consensus is that one new resident claims a shared tax of 300,000 won.

The officials say that the competition among municipal governments is so fierce that it’s natural that it has reached this point.

“When Gimcheon’s population went below the mark of 150,000 in 2004, the rank of the city mayor was relegated to the third level from second,” said a Gimcheon city official who spoke on the condition of anonymity due to the sensitivity of the issue.

“If we don’t adapt, there’s no way to survive,” the official said.

Some of experts and the public voiced concerns over the heated competition and question the effectiveness and appropriateness of the incentive measures.

“On the broader level, there is actually no new residents coming in, but seems like there is,” said Yoon Young-jin, a municipal finance professor at Keimyung University in Daegu.

“It’s like a zero-sum game competing for a limited number of targets. It’s different from a childbirth subsidy,” said the professor.

Others are concerned that such measures convey the wrong message to the notion of city development.

“If a city wants to draw more people, it should put more effort into making the city more competitive,” said Cho Geun-rae, director of Citizens’ Coalition for Economic Justice in Gumi, South Gyeongsang.

“But the cash incentive for students from other cities is only a stopgap measure and would not ultimately increase the competitiveness of the city.”