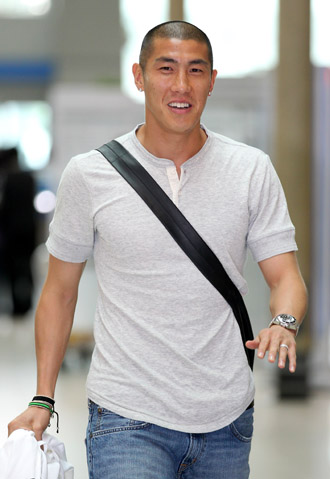 Cha Du-ri has signed with FC Seoul, according to the K-League Classic club yesterday, putting an end to the World Cup star’s winding journey from his birth country Germany.

Cha, 32, will play with FC Seoul for two years through 2014, the Korean club said. Few details of the terms of the contract have been announced.

Cha, who had limited playing time with his latest German club, Dusseldorf, had been searching for a K-League Classic team to move to since early this year. Dusseldorf released him last month, although his deal with the team was set to expire in June 2014.

It is the first time Cha will play with a Korean club. Cha graduated from Korea University in 2002, played on the semifinalist national team in the Korea-Japan World Cup and then joined Bayer Leverkusen, a Bundesliga club his father Cha Bum-kun played for before.

Cha Du-ri played at Leverkusen between 2002 and 2004, and continued his German stint with such teams as Eintracht Frankfurt, Mainz 05, SC Freiburg and Dusseldorf. Before signing with FC Seoul, his only spot outside Germany was with Celtic of Scotland between 2010 and 2012, during which he played with Ki Sung-yueng, who now plays for English Premier League side Swansea City.

Cha has played for the Korean national team since 2001 and has scored four goals in 65 appearances, including three World Cups.

FC Seoul is seeking to boost the team to realize its double goal of defending its K-League Classic title and winning the Asian Football Confederation Champions League. However, it’s currently sitting at 11th of 14 in the K-League Classic, having failed to win in its first three games. Seoul is considering using Cha as an offensive resource instead of putting him in his usual defensive position.