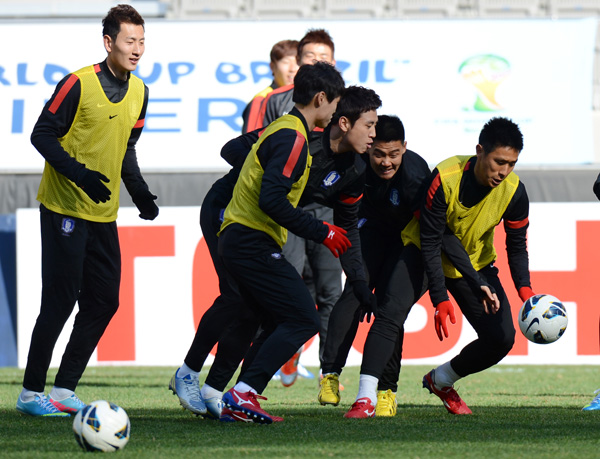 Korean national football team players practice at the World Cup Stadium in Sangam-dong, Seoul, yesterday. They host Qatar in their fifth game of the final World Cup qualifying round at the venue tonight. [NEWSIS]

The Taegeuk Warriors will host Qatar tonight determined to win and dampen the ever-growing pessimism about their chances of making it to Rio de Janeiro.

Korea’s fifth game of the final Brazil World Cup qualifying round against Qatar will be held at the Seoul World Cup Stadium at 8 p.m.

Korea is coming off a 4-1 victory over the Middle East country in their previous qualifying game, held in Doha on June 8 last year. Overall, Korea has three victories to a loss and two draws against the country. Korea is ranked 47th by FIFA, while Qatar is at 98th.

Korea is the Asian team with the longest World Cup qualifying streak, having made it seven consecutive times. But now it’s gone four games without a win.

Its chances of qualifying for the 2014 World Cup are dwindling, as the team is now runner-up to Uzbekistan in Group A.

“The tuneup matches were a stage for an experiment,” Choi told reporters, referring to the two friendly losses - a 2-1 loss to Australia in November and a 4-0 loss to Croatia in February.

“This time, the players have trained with unusual focus. Tomorrow’s game will be different from the games so far.”

The coach said coming out strong early while mounting a tough defense will be two key points against Qatar.

“If we want to fire a barrage of shots, we have to risk an adventurous game. That is football,” he said. “We could score, but we could surrender a goal. In the first game as well, if we hadn’t scored an equalizer quickly, we might have had a difficult game.”

Qatar scored first on Yusuf Ahmed’s 22nd-minute goal in the first qualifying game against Korea in June, but Lee Keun-ho hit back four minutes later before Korea added three more in the second half from Kwak Tae-hwi, Kim Shin-wook and Lee.

“We have a variety of scenarios,” Choi said. “It’s important to score first, while managing a game that isn’t volatile to a counterattack. Many spectators will come to a home game and the players could feel pressured and lead the game in an unexpected direction.”

Qatar will come with a realigned lineup led by young manager Fahad Thani, 39, who was an assistant coach to former Qatar manager Paulo Autuori, 56, of Brazil. Thani replaced Autuori as the head coach in January.

In June, there were nine foreign-born players with the Qatari team. Only two of them - Uruguay-born striker Sebastian Soria and Kuwait-born Wesam Rizik - remain. Up-and-coming young Qatari players such as Hassan Al Haydous, Khaled Muftah and Yousef Ahmad, as well as defender Ibrahim Majed, fill the void.

Two top teams from Group A will automatically get a World Cup berth. The third team will have a playoff in September with the third-place team from Group B. The winner will then enter the international playoffs in November, where it will have to vie with a Latin American team for a spot at the World Cup.