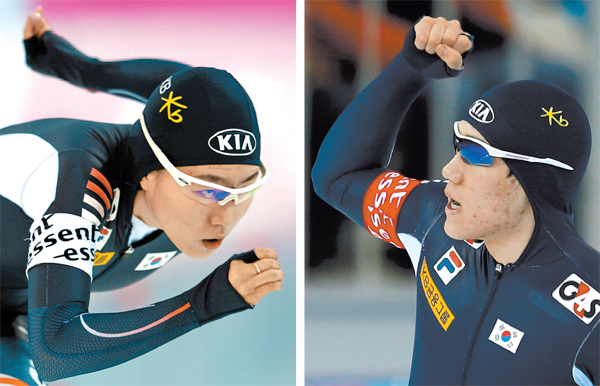 Korean national football team players practice at the World Cup Stadium in Sangam-dong, Seoul, yesterday. They host Qatar in their fifth game of the final World Cup qualifying round at the venue tonight.[NEWSIS]

Korea dominated the 500-meter
events at the world speedskating
championships on Sunday, with Lee
Sang-hwa and Mo Tae-bum taking the
women’s and men’s titles.
At the two-race final held at the
Adler Arena ice rink in Sochi, Russia,
the venue of the 2014 Winter Olympics,
Mo, 24, combined for 69.76 seconds,
ahead of Joji Kato of Japan who
clocked 69.820. Jan Smeekens of the
Netherlands came in third at 69.860.
At the women’s final (also held on
Sunday), Lee, 24, led both races to
clock 75.34 seconds, followed by Wang
Beixing of China at 76.043 and Olga
Fatkulina of Russia at 76.080.
Lee and Mo, both 2010 Vancouver
Olympic gold medalists in the distance,
won the title at the 2012 world
championships as well. It’s the first
time a Korean athlete has succeeded in
defending his or her worlds title.
With Mo’s victory, Korea succeeded
in extending its dominance in the
500-meter speedskating event to five
years. Lee Kang-seok won the worlds
title in 2009, and Lee Kyou-hyuk won
the 2011 event. There were no world
championships in 2010 due to the Vancouver
Olympics, which Mo won.
Lee Sang-hwa has become the first
Korean speedskater, male or female, to
win both the World Cup overall title
and the world championships in a
year. Lee amassed 1,055 points from a
total of nine World Cups in the 2012-
13 season, through the final World
Cup event in Heerenveen, Holland on
March 10. The world championships
are the season-ending event.
Two Chinese athletes won the
overall World Cup title and the worlds
title in the same year in the women’s
500-meter event before, but Lee is the
first Asian to do it with a world record.
Lee won a World Cup event in Calgary,
Alberta in January with a time of
36.80 seconds, taking 0.14 seconds off
the previous 500-meter world record
set by Yu Jing of China a year earlier.
Korea also won a silver medal in
the men’s team pursuit event on Sunday,
with a time of 3:44.60, 2.57 seconds
behind the winner, the Netherlands.
Poland came in third at 3:45.22.
It is the first time an Asian country has
won a Team Pursuit Men medal at the
worlds.
In the women’s team pursuit event,
Korea finished third after the Netherlands
and Poland. It’s also the first
worlds medal in the women’s team
pursuit event for Korea.
Overall, Korea finished runner-up
in the medal standings, with five. Mo
won silver in the men’s 1,000-meter
event on Saturday. It’s the most medals
that Korea has earned at a world championships.
The Netherlands won six
gold medals.
Kim Kwan-kyu, an executive of
the Korea Skating Union, said that the
team pursuit events medals were very
encouraging for Korea.
College athletes boosted the country
in the pursuit events.
“Short sprinters such as Mo Taebum
and Lee Kyou-hyuk have made
steady growth on the international
stage,” Kim said. “Thanks to them,
younger athletes were also motivated
and are steadily producing good results.”