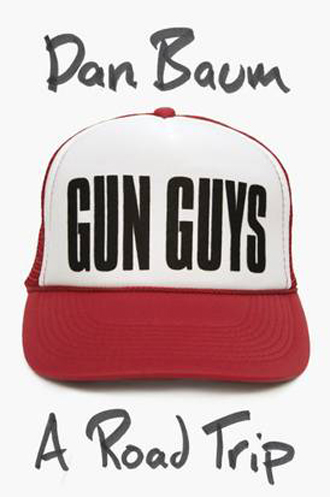 Writer Dan Baum, a self-described Jewish liberal Democrat and a gun enthusiast since childhood, strapped a revolver to his side in 2009 and set off on an 18-month, 15,000 mile exploration of the U.S. firearms culture.

His book, “Gun Guys: A Road Trip,” was released this month amid a gun-control debate rekindled by the Dec. 14 shootings at Sandy Hook Elementary School in Newtown, Connecticut.

Baum, who lives in Boulder, Colorado, says it was a challenge to write for two polarized audiences: liberals and fiercely protective gun lovers.

He spoke to Reuters about America’s gun culture, semiautomatic weapons and what he learned about himself from writing the book.

Q. Are you a gun guy or were you acting the part?

A. I’m a gun guy, and I live in a world of antigun people. Being a liberal Democrat, my whole social world is among people who dislike guns and dislike gun people.

What should gun-control advocates know about America’s gun culture?

Guns are cool; they’re fun; they’re mechanically gorgeous; they last forever. But the really deep stuff is - we have a lot of freedom in this country to own guns. Our gun laws bespeak a trust in the people. And for the gun guys, this is really what America is about.

The ones who mostly buy guns are straight, white, middle-aged men, rural, who have not finished college, and that is a demographic that has seen their world collapse in all kinds of ways. The NRA [National Rifle Association] comes along and whispers in their ear, “Yeah, you’re pissed, you know why? Because the liberals want to take away your guns.”

Gun guys derive tremendous pride from being able to manage these incredibly dangerous devices safely, and then along come these pointy-headed urban liberals who have never had any guns, and they want to tell you that you can’t be trusted with this device. It is unimaginably offensive. I’m not asking you to like these people. But I’m asking you to listen to them. They are not just testosterone-poisoned death freaks.

And what can the 100 million U.S. gun owners do to lower the temperature?

You quote a prediction that President Obama would push for gun control if re-elected.

I lost a $100 bet with a guy. I said there’s no way that the Democrats are going to make another serious run at gun control. I think they’re going to pay big time. Until the gun-control push after Sandy Hook, we had a chance of taking the House [of Representatives]. Now we have no chance.

Is it wrong to focus on controlling semi-automatic rifles, particularly the AR-15.?

It’s ignorant. The gun-control world is trying to pass off the AR-15 as some kind of bizarre outlier of the gun world, when in fact it’s all anybody wants to shoot.

What did you learn about yourself through this book?

I am no less a Democrat, I am no less an Obama supporter. But I really understand the conservative lament that we are becoming a nation of weak, disrespected, over-managed individuals.

You depicted conversations and scenes at which you were not present. How did you come about your story-telling style?

I ask a lot of questions. If I can go see the place where it happened, I do that.

I try to talk to as many people who were there as I can. It takes time to get that out of people. I’m writing about ordinary people, and I try very hard to portray them the way they want to be portrayed.

You’ve also written about the drug wars. How does the gun-control effort compare?

The gun issue, like the drug issue, is used to avoid talking about all kinds of stuff that’s much more central. We have gone out of our way to avoid having any sense of collective care. Reuters