Talk back to the president

Talk back to the president 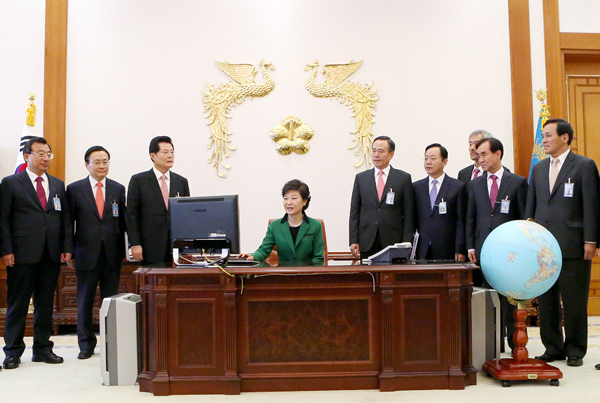 President Park Geun-hye has earned the trust of many people for a long time because the public believes she is an honest politician. However, that does not mean all of her people share that reputation. The public is yet to open up to the people around her. In the course of dealing with the sex-for-influence scandal, Park’s aides have failed to prove their competency.

The best performance comes from the best concentration, and what disturbs focus is personal interests. You may be more interested in the position, promotion and compensation than the work itself.

Kwak Sang-do, presidential secretary for civil affairs, has disappointed us all. It was his job to verify the credentials of Kim Hak-eui, who was involved in the Wonju sex scandal, in the process of his appointment as the vice justice minister. And Kwak failed to properly vet him.

Politics are evaluated not by motives but by outcome. That’s why politics are so difficult. However, the office of presidential secretary for civil affairs claimed that there was not much they could do since the police said there was no video and the appointee denied the allegation. It seemed that the senior secretary simply checked any illegality associated with the case instead of looking at it as a moral issue. Citizens cannot accept the involvement of the vice minister nominee in the sex scandal regardless of the possible indictments against him.

The Blue House staff has limited authority and unlimited responsibility. Especially, the secretary for civil affairs has tremendous responsibility and should be ready to speak frankly to represent the perspective of the people.

At this juncture, Saenuri Party spokesman Lee Sang-il brought a refreshing point of view by criticizing the incompetency of the Blue House and condemning the lethargy of the ruling party. Lee is in Park’s inner circle. When Park was the head of Saenuri Party’s emergency council, she called Lee personally and asked him to join her political quest. Lee said in an official remark on March 22, “The ruling party was conscious of the Blue House’s intentions when negotiating the government reorganization bill. The Blue House makes lame excuses on their slack personnel verification, and it only highlights their incompetency. The citizens are not convinced, and we have to hold accountable those involved in the lax verification of the ministerial and vice-ministerial candidates.”

At the beginning of the administration, the president has great power, and it is not easy for an insider to speak up. Those in the inner circle seem to be shocked by the spokesman’s comment. The Blue House has checked with the Saenuri Party leaders as to what led to such a comment.

When I asked Lee about the motive, he said, “I just looked at the public sentiment straight without personal motivation. I think making straight and honest comments to the president shows my loyalty.”

Those working for the president need to be selfless to make frank comments to the president. If they give up the greed of staying in the position, they will get a sense of reward, joy and satisfaction in return. That’s where the deep love of the people begins.

*The author is an editorial writer and JTBC News 9 anchor.