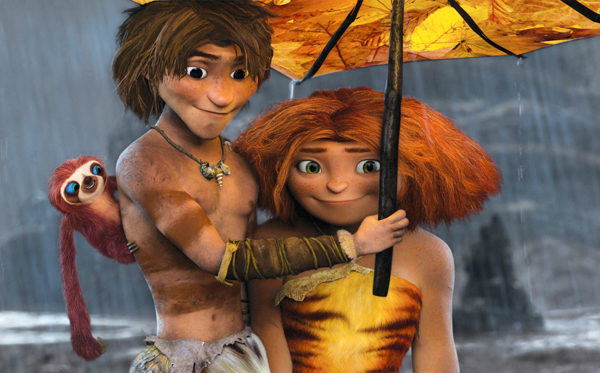 LOS ANGELES - Animated prehistoric adventure “The Croods,” about a family of cave dwellers fighting for survival, claimed the top spot on movie box office charts with $44.7 million from weekend ticket sales in the United States and Canada.

The 3-D children’s comedy from “Shrek” and “Madagascar” creator Dreamworks Animation added $63.3 million from international markets, the studio said on Sunday, for a global total of $108 million.

“Croods” dethroned two-time box office champ “Oz the Great and Powerful,” which slipped to third place on domestic charts. The Walt Disney prequel to “The Wizard of Oz” earned $22 million during its third weekend, according to studio estimates.

In between the two family films, thriller “Olympus Has Fallen,” about a White House under terrorist attack, took in $30.5 million at U.S. and Canadian theaters.

The performance of “Croods” provided a solid opening for Dreamworks, which needs a hit after the disappointment from November’s “Rise of the Guardians.”

Box office analyst at Exhibitor Relations, Jeff Bock, said the opening bodes well for Dreamworks, which he said is in the process of establishing new films ripe for sequels.

“It’s a great start for a spring film, especially one that’s animated,” he said.

Bock predicted that the film will gross between $175 million and $200 million over the next two months or so.

“Croods” tells the story of a Stone Age family that is uprooted after its cave is destroyed and forced to search for a new home. Nicolas Cage provides the voice of an overprotective father, while Emma Stone voices his rebellious daughter. The movie cost $135 million to make, plus tens of millions more for marketing.

Ahead of the weekend, Wall Street analysts said “Croods” needed a domestic opening around $40 million to ease investor concerns following the weak results from “Guardians,” which opened with $24 million and grossed $303 million total during its global run.

The poor performance of the holiday-themed “Guardians” forced Dreamworks to write down $87 million and contributed to 350 layoffs taking place this year, the company said in February.

Dreamworks Animation Chief Operating Officer Ann Daly said she expects the film to do “phenomenally well” over the next few weeks, pointing to its A CinemaScore rating and the fact that many U.S. children will be off from school and more likely to head to the movies. “This time period is a big opportunity for us,” Daly said, citing “How to Train Your Dragon” as a past example of a family film that benefited from a release during a similar time frame. Reuters