Top ballet dancer goes out on her own

Top ballet dancer goes out on her own 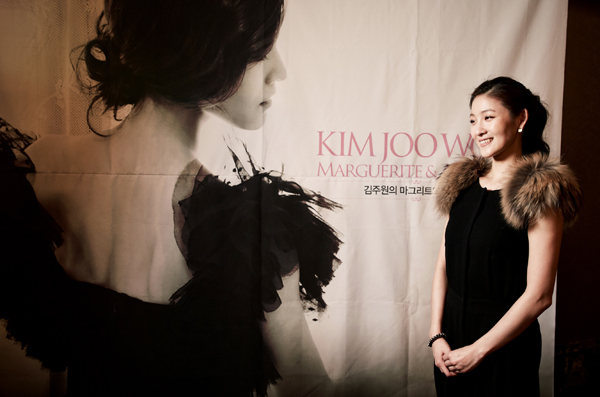 Kim Joo-won is bringing the legendary ballet “Marguerite and Armand” by choreographer Frederick Ashton to Korea for the first time next month. Provided by Theatro

Thirteen years ago, an Asian ballerina in her early 20s went to watch “Marguerite and Armand” by French ballet dancers Sylvie Guillem and Nicolas Le Riche at London’s Royal Opera House. When everyone else in the auditorium stood up and applauded, the young ballerina felt weak in her legs, unable to stand. Kim Joo-won, 35, who was then already Korean National Ballet’s prima ballerina, recalled the performance and said she was so touched she couldn’t even remember the dance moves she had just seen.

“As a dancer myself, it doesn’t make any sense that I couldn’t remember the dance moves at the end of the performance. It was only 35 minutes long, but it was like watching a film, not a ballet. I could remember the story line but not the movements. That really shocked me. I guess I was just drowned in the beauty and the emotions of Marguerite,” Kim said.

More than 10 years have gone by, and the ballerina said she never forgot about that day. Finally, after withdrawing from her position as prima ballerina in June, she is bringing the legendary piece to Korea for the first time next month.

“Marguerite and Armand” is a 1963 piece by renowned choreographer Frederick Ashton. The British artist created the ballet based on the 19th-century novel “The Lady of the Camellias” by Alexandre Dumas for legendary dancers Rudolf Nureyev (1938-93) and Margot Fonteyn (1919-91). Since the two dancers’ death, the piece was recreated by Guillem in 2000 - the version Kim saw in London.

“For more than 10 years, the piece hovered above my head. I decided to give it a try and ask for permission to perform the piece from the Royal Ballet, which has its copyright, although I knew that many ballet companies and ballet dancers get rejected,” said Kim in a recent interview with the Korea JoongAng Daily. “I was so honored when the Royal Ballet gave me the permission to perform the piece.”

To receive permission, Kim had to send her profile, list of awards and video clips of her performances as well as information on her partner for the piece Kim Hyun-woong, who is currently with the Washington Ballet. Kim is the first Asian ballerina to be given the honor of playing Marguerite.

“Although it was my dream to stage this piece, I wasn’t really sure that I would be able to receive the Royal Ballet’s approval,” said Kim. “Luckily, they liked me and gave me this honorable opportunity.”

Here are some more excerpts from the interview. 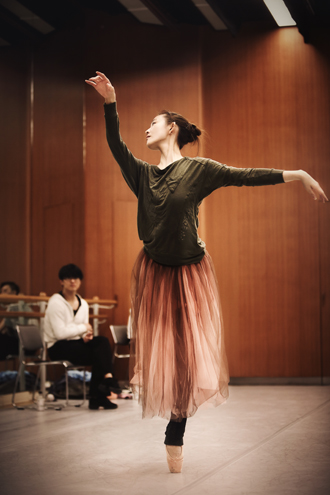 Q. It’s been six months since you left the Korea National Ballet. What are the major changes in your life?

A. First of all, the title in front of my name has changed. I was called the prima ballerina of KNB, but now I am called by different titles including ballerina Kim Joo-won, artist Kim Joo-won or even prof. Kim Joo-won. I still feel a little awkward being called a professor. While I was with the KNB, I always did what was given to me. But now, I have to plan things, organize things and search for things. That’s the major difference.

The plot of the piece may be familiar to Korean ballet fans as the Stuttgart Ballet came to Korea to perform “Lady of the Camellias” with Kang Sue-jin as a principal. What differences are there when compared to “Marguerite and Armand,” which will be performed for the first time by you in Korea?

First of all, the major difference between the two works is the choreography. “Marguerite and Armand” is only about 35 minutes long with Franz Liszt’s B minor piano sonata whereas “Lady of the Camelias” uses Chopin. Moreover, “Marguerite and Armand” is a piece dedicated to two ballet dancers Rudolf Nureyev and Margot Fonteyn. After the two dancers passed away, the piece actually died out until Guillem revived it in 2000. When these people talk about “Marguerite and Armand,” they use words like “special” and “precious.” I heard that many ballet companies and ballet dancers have contacted the Royal Ballet to receive permission to perform the piece, but many were rejected.

You are the first Asian ballet dancer to have received permission to perform the role of Fonteyn in “Marguerite and Armand.” How does it feel?

I am so thankful. The process [to receive permission] wasn’t easy but the fact that they allowed me to take the role played by Fonteyn is just an honor. My role models - the dancers I looked up to as a child - have performed it.

Our choreographer recently told me that the role is a perfect fit for me. I am really thankful.

It couldn’t have been easy to leave your job as prima ballerina of the KNB. Why did you decide to leave?

I wanted to have more time to immerse myself into my characters. While I was with the KNB, I had to work on four to five different roles at once, and I didn’t really like that. Of course, living like that for the past 15 years was the right thing to do. But now, I think it’s time for me to study one character at a time and stage performances that are more truthful to my heart and soul. So far, I’ve just been doing pieces that were given to me by the KNB, but now I want to search for my own pieces - ones that are interesting and fill with my skill set. I also just completed my first semester as a graduate student majoring in social welfare. I wanted to have more time to study and plan to help children.

What made you want to study social welfare?

It goes back many years. About a decade ago, I had an opportunity to teach dance to children in need through an NGO. When I walked into the classroom, the children were staring at me with their eyes full of mistrust. But after dancing together for couple of hours, sweating, laughing, falling down and holding hands, I noticed that their eyes began to shine. They had sparkly children’s eyes. From then on, I have continued to help out as much as I can using my talent. Ballet is of course a performing art in which a dancer wears a magnificent dress, dances under a spotlight and receives applause on stage. But I also think it’s a tool that one can use to give hope to children who are going through a hard time. If I had a lot of money, I would donate more, but because I can’t do that, I decided that I needed more knowledge. That’s why I began studying social welfare, especially focusing on child welfare. I thought if I had more knowledge, I could use the talent that I have and help children more wisely and effectively.

“Marguerite and Armand” will be performed for three days starting April 5 at LG Arts Center in Yeoksam-dong, southern Seoul. Tickets cost between 40,000 won ($36) and 100,000 won.