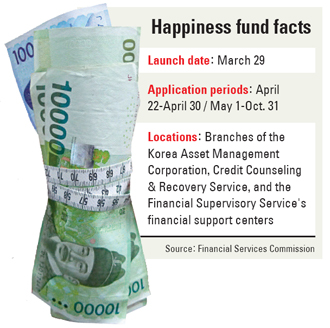 The government’s muchtouted “people’s happiness fund,” which is supposed to write off overdue debts owed by low-income households, will be officially launched this Friday, the Financial Services Commission said yesterday.

Around 330,000 people with long-term debt are expected to benefit from the fund.

According to the country’s financial regulator, the target group for the fund are debtors who have borrowed less than 100 million won from financial institutions including banks and nonbanks and who have been in arrears for more than six months as of the end of last month.

People in the target group will be able to receive support from the government to write down their debts by up to 70 percent depending on their income levels. They will be required to repay the balance over a period of up to 10 years.

The government will buy loans from the institutions. Some 3,800 financial institutions and private lenders have said they will take part in the project including savings banks, insurance companies and banks, the regulator said.

Pre-applications can be submitted April 22-30 and regular applications May 1-Oct.31 at branches of the Korea Asset Management Corporation, the Credit Counseling & Recovery Service and the Financial Supervisory Service’s financial support centers nationwide.

The creation of the people’s happiness fund was one of President Park Geun-hye’ presidential election pledges last year amid concerns that Korea’s rising household debt is keeping the local economy from growing. According to recent data by the Bank of Korea, the country’s household debt reached a record high of 959.4 trillion won last year, a 47.6 trillion won increase from the previous year.

The FSC also said yesterday that people with student loans who have not been able to repay them for more than six months as of the end of February will also benefit from the people’s happiness fund. People who have borrowed from nonbanks and private lenders with interest of more than 20 percent will also be able to transfer their loans to banks with interest rates in the 10 percent range for loans of up to 40 million won.

“Debtors who do not apply to the fund [due to various reasons including not knowing of the plan] will be selected by the government and will be informed,” said Jung Eun-bo, an FSC official.

The response to the government’s plan, however, was mixed. There are worries that the plan could bring moral risks because people who have been regularly paying back debts to lenders would no longer feel the need to repay.

A recent report released by the Hyundai Research Institute also raised concerns that the fund would not give benefits to low-income households with debt that aren’t behind on their payments.

“The government’s people’s happiness fund will bring moral risks because debtors that work hard to repay their debt will no longer do so thinking the government will write down their debts,” said Lee Joon-hyup, a research fellow at the Hyundai Research Institute.

The FSC said beneficiaries will be informed this is a one-time offer and that it will check whether applicants have hidden assets.