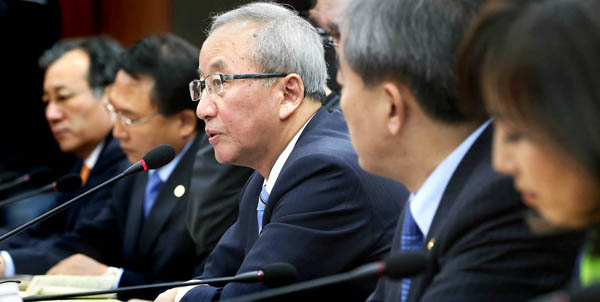 Finance Minister Hyun Oh-seok said yesterday the first economic policy package of the Park Geun-hye government will include a supplementary budget, incentives for business investment and some financial measures.

The package is scheduled to be announced this week, most likely on Thursday, according to officials at the Ministry of Strategy and Finance.

The new finance minister, who is also the country’s deputy prime minister for the economy, said it is important to maintain fiscal soundness along the line of his predecessor Bahk Jae-wan. But, he said, fiscal policy should also be able to contribute to improve the economy.

“It is unavoidable to consider fiscal soundness, because the country has challenges like aging, welfare spending and reunification with North Korea,” Hyun said. “But the economic situation should decide how much emphasis needs to be put on fiscal soundness.”

Despite worries about deficits, the new finance minister is firmly determined to use a supplementary budget to boost the economy. According to sources, the extra budget is projected to be around 10 trillion won ($9 billion).

“One of key factors to reviving the domestic economy is business investment,” he said, “The upcoming economic policy package will include improved conditions for businesses to make more investments.”

The government’s forecast for GDP growth for this year is highly likely to fall below 3 percent as Hyun mentioned on Saturday. Currently, the finance ministry’s estimate for 2013 GDP growth is 3 percent, which was made last December.

“There are more downward risks for the economy,” Hyun said, “Than predicted by the former government and research institutions late last year. That is why the government is preparing a package of measures to restore growth.”

The new package will contain some financial measures, too, Hyun said.

“They could include coordinated work with the Bank of Korea’s monetary policy committee on the benchmark interest rate and financial incentives for exporters,” he said.

BOK Governor Kim Choong-soo has also been highlighting the importance of a policy mix. He repeated that harmony between the government and the central bank’s policy is crucial to making economic policy work.

Given that the finance minister and the BOK governor are on the same page, there are increasing chances of the central bank cutting the key interest rate in the near term.

The BOK has kept the rate at 2.75 percent since last October. The monetary policy committee will hold its meeting on Thursday.

However, the minister underscored that independence of the central bank, even though the finance ministry is at the helm of the economic policy.

Hyun visited the Sejong government complex in South Chungcheong for the first time and officially started his job as deputy prime minister and finance minister yesterday.

Hyun and other economy-related ministers also held the first ministerial meeting on economic affairs in the afternoon to discuss the first economic policy package of the Park government.