Sharapova into 4th round in Florida

Sharapova into 4th round in Florida 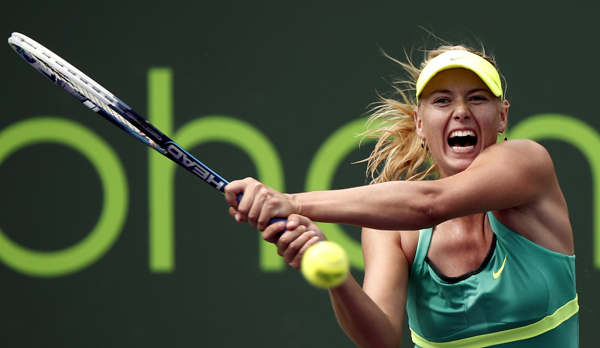 KEY BISCAYNE, Florida - Mired in a marathon game midway through the opening set, Maria Sharapova wore down her opponent with characteristic resolve and relentlessness, winning the last point without hitting a shot.

That put Sharapova ahead to stay, and she beat fellow Russian Elena Vesnina on a muggy, 85-degree afternoon at the Sony Open, 6-4, 6-2.

The No. 3-seeded Sharapova moved into the fourth round, eager to fill one of the few holes in her resume. While she completed a career Grand Slam last year, she has never won Key Biscayne, losing the final in 2005, ’06, ’11 and ’12.

“It’s in the back of my mind,” she said. “It’s one of the biggest tournaments for us, and it’s one that I have been the most consistent at, being in four finals, but yet not winning it. I would definitely love to go a step further here.”

Her pivotal moment Sunday came at 3-all in the first set. The next game went to deuce seven times, with Sharapova repeatedly erasing a deficit, until Vesnina dumped a weary second serve into the net on break point.

“That was a very important game,” Sharapova said. “It was a really long one. I was ready for a water break.”

All told, Sharapova benefited from eight double-faults by the No. 29-seeded Vesnina, and erased eight of the nine break points she faced.

Lauren Davis of the United States lost to No. 32-seeded Alize Cornet at the peak of the heat, and their 2 1/2-hour match left both players so exhausted they were taken off the court in wheelchairs. Davis also required treatment in the third set after being stung by a wasp.