Behind the scenes judging COTY

Behind the scenes judging COTY 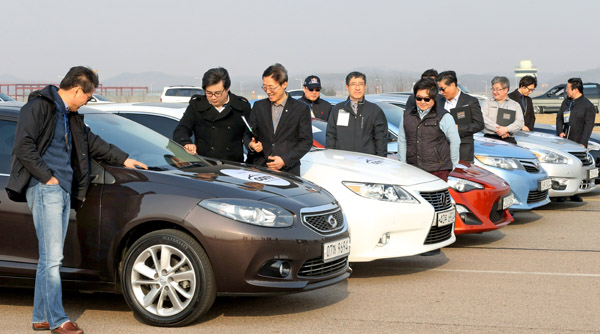 COTY judges take a look at the cars before a test drive on March 9 at the Korea Automobile Testing and Research Institute in Hwaseong, Gyeonggi. [JoongAng Ilbo]

Just like any other Car of the Year award evaluation, this year’s screening process was a tough time for judges.

Fifteen COTY judges, including a former automaker executive, a journalist, a professor, a researcher and a car racer, all gathered around the track at the Korea Automobile Testing and Research Institute in Hwaseong, Gyeonggi, on March 9 for the test drive.

The 16 final cars were decided last month. In the first stage of screening, judges examined 63 automobiles from 29 carmakers. After hearing presentations from automakers and analyzing their research data, they cut the list down to 16.

Once the second evaluation started, with the scores from the first screening reset, judges carefully proceeded to find the advantages and disadvantages of each model.

An official from the Korea Transportation Safety Authority explained the safety requirements of each country to judges before the test drive.

“Judges conducted a rigorous and thorough inspection,” an official from the 2013 COTY said. “The test drive assessment started at 9 a.m. but ended at 8 p.m., which was two hours later than scheduled.”

Before hitting the road, judges first looked around the interior of the car and examined the features.

In particular, for this year, there was a new user-friendly assessment category, such as “setting the navigation destination to Seoul Station,” “getting the right radio frequency,” and “connecting the smartphone and car audio system through Bluetooth.”

In the first test drive, judges drove vehicles on a course that is designed to check acceleration (zero to 100 kilometers, or 62 miles, per hour), braking, handling and speed bumps.

Courses that tested the four SUV models’ off-road performance were also included, while the 12 other passenger cars were tested for their driving performance, running a five-kilometer circuit at 150 kilometers per hour.

The screening process for the 2013 COTY will be made into a documentary and broadcast on JTBC later this month.

“The JoongAng Ilbo COTY has been going through a high-quality screening process over the years,” said Yoon Dae-sung, executive managing director at Korea Automobile Importers and Distributors Association, who is also an adviser for COTY. “In automobile assessments, professionalism and fairness is important, but so is transparency, which can show the process clearly to others.”