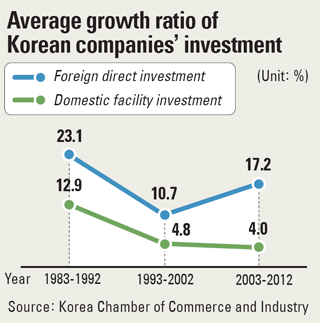 Korean companies are focusing on direct investment overseas and spending less on domestic facilities, according to data compiled by the Bank of Korea and the Export-Import Bank of Korea and released by the Korea Chamber of Commerce and Industry (KCCI) yesterday.

According to the KCCI, the average growth of Korean companies’ domestic investment slowed during the 2003-12 period to a mere 4 percent yearly, while their direct investment in foreign markets grew an average of 17.2 percent yearly in the same period. The gap in companies’ investments domestically and abroad deepened further compared to the 1993-2002 and the 1983-92 periods.

During the 1993-2002 period, companies’ foreign direct investment grew an average 10.7 percent while their spending on domestic facilities grew an average 4.8 percent every year.

To improve domestic investment, the KCCI suggested the government alleviate regulations, eliminate reverse discrimination, provide various aids to so called “U-turn” companies returning to the domestic market, and encourage companies to promote an entrepreneurial spirit to fix their positions in niche markets.