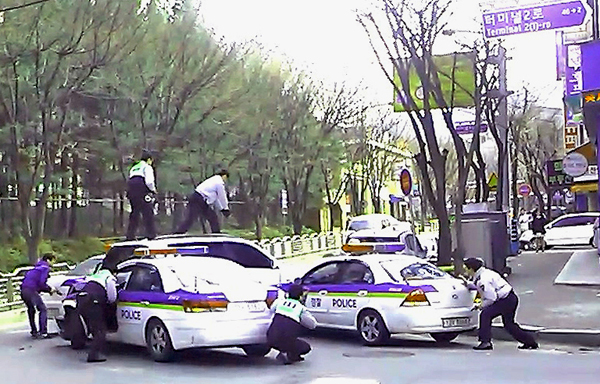 Two police officers stand on top of the fugitive’s Rexton SUV vehicle Sunday while other officers surround the car in Dongnam District of Cheonan, South Chungcheong. Provided by Choi Seong-pyo

A gunfight broke out between police officers and a suspect on the run in Cheonan, South Chungcheong, when the fugitive opened fire on the police officials with a hunting rifle.

The Cheonan Seobuk Police Precinct reported Sunday that officers engaged in a high-speed chase and exchange of fire with the suspect, identified by his surname Cho, in Dongnam District, Cheonan.

They apprehended the suspect after he was shot with a taser at around 10 a.m. Sunday.

In Korea, where the gun-control law is very strict, a police shootout in an attempt to get away is extremely rare.

The 46-year-old suspect was pursued by the police on charges of abducting and sexually assaulting a 23-year-old woman, identified by her surname Choi, on March 18 in Cheonan’s Seobuk District.

The woman escaped three days later near Asan, Gyeonggi, and went to the police.

The suspect was spotted by the police near the victim’s house in Cheonan at around 9:50 a.m. Sunday.

As the police ran toward him, Cho got into his Rexton SUV vehicle and tried to flee, driving about 10 kilometers (6.2 miles) with the police on his tail.

As six police vehicles surrounded Cho’s car, the suspect slightly rolled down his driver’s side window and began firing with his hunting rifle.

The suspect shot at the officers five times as they approached his car.

The authorities said they captured the suspect after they stunned him with a taser. Inside his car, about 160 rounds of ammunition were found.

No casualties or wounds were reported, the police added. The suspect is now undergoing questioning by the police. The authorities said they will soon request an arrest warrant to put him behind bars on multiple charges.