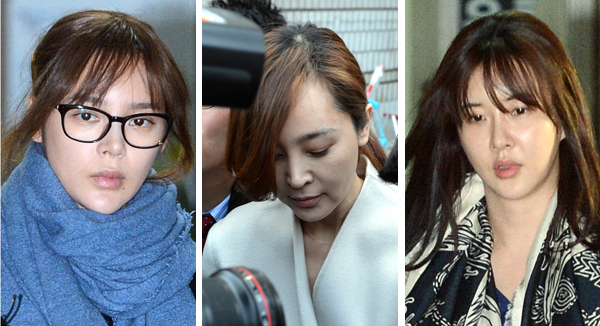 From left: Celebrities Park Si-yeon, Lee Seung-yeon and Jang Mi-in-ae appear yesterday at the Seoul Central District Court in southern Seoul for trial on charges of illegal use of the powerful and possibly lethal drug propofol. [NEWSIS]

The trial of three female celebrities charged with illegal use of propofol, a powerful anesthetic and memory loss agent that can kill in overdoses, began yesterday at the Seoul Central District Court in southern Seoul.

All three of the defendants - actresses Park Si-yeon, Jang Mi-in-ae and Miss Korea-turned TV beauty program host Lee Seung-yeon - maintain that their use of the drug that contributed to the death of pop star Michael Jackson was for medical purposes, not for recreational use or to help sleep.

“[Jang] admits to taking the drug but [she] had a medical need for propofol under a doctor’s prescription,” a legal representative of Jang told reporters.

The attorney noted the need of actresses to keep their bodies in balance as the reason his client used it.

“As an actress, [Jang] suffered pain after undergoing some beauty treatments,” said the defense lawyer. “Light surgical procedures are extremely important for female TV stars to stay fit and beautiful. The masses tend to overlook the excruciating pain behind the glitter. If she was not a TV star, she wouldn’t need to take propofol during carboxy therapy [a non-surgical method mainly used to remove fat].”

As for the prosecution’s claim that carboxy therapy doesn’t necessitate a sedative, the attorney said, “Things are actually different from the widely-held perception. The use of propofol was needed to ease the pain of the therapy.”

Lee’s defense attorney echoed those comments. “There was no symptom of addiction to the drug,” he said, “And [Lee] only took propofol for medical purposes following the advice of the doctor.”

Park and her legal representative didn’t comment to reporters waiting in front of the court.

Two doctors indicted for prescribing the drug to the three defendants also appeared at the court, including a gynecologist surnamed Mo, who said, “I didn’t know the actresses were addicted to it.”

The Food and Drug Administration classified the drug as a psychotropic medicine in 2011, regulating the prescription or use of the substance other than for treatments such as gastrointestinal endoscopies.