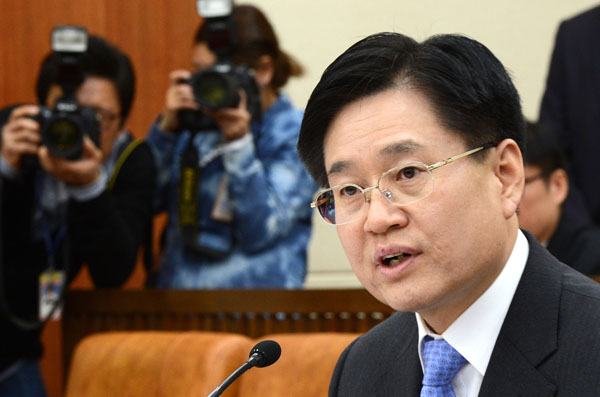 Kim Duk-joong, nominated to head the National Tax Service, answers questions from lawmakers during a hearing at the National Assembly in Yeouido, western Seoul, yesterday. [NEWSIS]

The National Tax Service (NTS) confirmed its intention to crack down on tax cheats to raise money for welfare spending, a spending priority of President Park Geun-hye.

The tax agency has started an unprecedented number of investigations on high-earning professions and businesses including doctors, lawyers, dentists, realtors and even wedding halls. Its emphasis is on businesses in which cash payments are common.

“We estimate that roughly 6 trillion won [$5.4 billion] will be collected by analyzing suspected tax evasion and hidden fortunes once the NTS has direct access to the [Financial Service Commission’s] financial intelligence unit data,” said Kim Duk-joong, who was nominated to head the tax agency, at a National Assembly hearing yesterday.

“According to the Institute for the Future of State, Korea’s underground economy last year was estimated to be 175.5 trillion won, which is 17.1 percent of the nation’s GDP,” Kim said. “But I believe it is actually larger and much larger than underground economies in major advanced countries.”

The underground economy includes illegal businesses such as money laundering, manufacturing and distributing fake gasoline or other counterfeit products, and shady entertainment venues, but also legal businesses in which income is not declared.

That includes high-income professions as well as sending money offshore to avoid tax and illegally bequeathing assets to children.

“I will stop tax evasion made possible by cash payments or transactions made from bank accounts under other peoples’ names as well as unfair trade by conglomerates and the wealthy,” Kim added.

Although the agency has investigated highly paid professions for possible tax evasion in the past, it hasn’t taken on so many simultaneously.

Since the beginning of this month and through April 15, the tax office will follow up on tip-offs, including reports of businesses that don’t offer receipts for cash payments.

Starting this year, the maximum reward for a successful tip-off has been raised from 100 million won to 1 billion won.

“Compared to the same period last year, tip-offs on possible tax evasion have increased 30 percent,” said an official at the NTS. Additionally, the tax office has added 400 more investigators to swell the ranks to 4,500. The tax agency employs 20,000 people.

As the office steps up its probe, some professions are getting more careful.

“Sometimes we forget to issue receipts for cash payments by patients,” said a 40-year-old dentist who didn’t want to be identified. “[But with the tax office’s enhanced probe] we’re checking on the payments made in cash especially for pricey treatments like implants, in which the bill can run to several million won.”

Earlier this year, the agency started an investigation of 66 people accused of manufacturing and distributing fake gasoline and expanded their probe to illegal loan sharks. Jewelry stores and butcher shops are expected to be next in line.