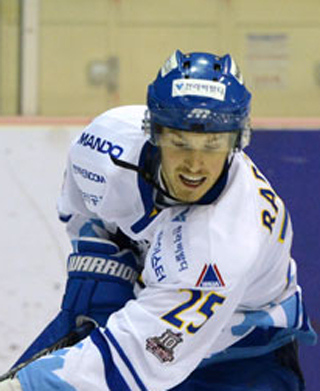 Brock Radunske, a Canadian ice hockey player who has played in Korea for five years, received Korean citizenship yesterday, paving the way for him to represent Korea in the upcoming world championships.

He is the first Western athlete with no Korean heritage to become a Korean.

Radunske, 29, passed the final interview for special naturalization at the Ministry of Justice yesterday morning, the Korean Olympic Committee said. The KOC recommended him for the process on Feb. 20.

Special naturalization was institutionalized in 2010 as part of efforts to increase the country’s talent pool. Unlike general naturalization, those becoming Korean through the special track can retain their original nationality.

Radunske, who has played in several development leagues for North America’s National Hockey League, came to Korea in 2008 and has played with Anyang Halla Ice Hockey Club since. He contributed to the Korean club winning the regular season of the Asia League in the 2008-9 season and winning both the regular season and the playoffs in 2009-10. He was the seventh-highest scorer this season with 23 goals.

The KOC said he will join a training session for the Korean national team today to prepare for the 2013 International Ice Hockey Federation World Championship that kicks off in Budapest, Hungary on April 14. Korea was promoted to the top-tier Division 1, Group A for the first time last year by winning Division 1, Group B at the 2012 event.

In Group A, Korea is paired with Great Britain, Hungary, Italy, Japan and Kazakhstan.

Radunske is the fifth foreign athlete to become a citizen through the special naturalization system. Moon Tae-jong and Moon Tae-young, brothers born of an American father and a Korean mother who play in the Korean Basketball League, were the first beneficiaries of the system in July of 2011. Kimberly Roberson of Samsung Life Bichumi in the Women’s Korean Basketball League, who also has a Korean mother, followed suit in November of that year, along with short track speedskater Kung Hsiang-jing, who is from the third generation of a family of Taiwanese immigrants.