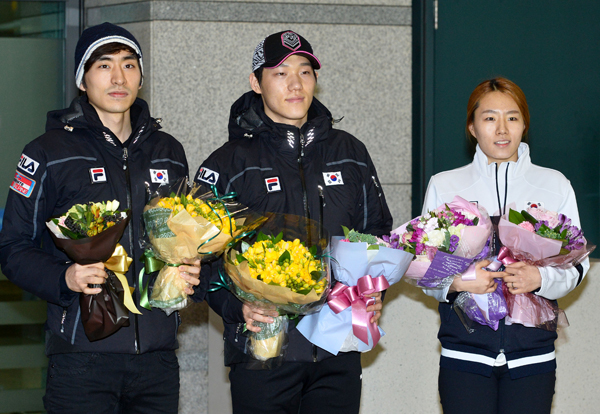 After ending the season on a positive note with podium finishes at the 2013 world championships in Sochi, three star Korean speedskaters immediately turned their eyes to the 2014 Olympics, pledging another medal performance in the Russian resort city.

Lee Sang-hwa, Mo Tae-bum and Lee Seung-hoon arrived in Korea yesterday, bringing back with them the best result the country has ever had at the world speedskating championships. Lee Sang-hwa and Mo took the women’s and men’s 500-meter titles at the World Single Distances Championships in Sochi on Sunday. Mo also won silver in the men’s 1,000-meter final on Saturday. Lee Seung-hoon bagged a silver as part of the Korean team in the team pursuit event on Sunday.

The women’s team added a bronze medal in the team pursuit final, increasing the medal tally to five and setting a new record for the nation.

Lee Sang-hwa, the 2010 Vancouver Olympics gold medalist in the 500-meter, said the upcoming season will be more important.

“The Olympics are just around the corner,” Lee, 24, told a joint press conference, flanked by Mo and Lee Seung-hoon at Incheon International Airport. “The 500-meter event is a fight for one-thousandth of a second, so I will train with a focus on improving my speed in the early phase,” she said.

Lee’s performance this season has brightened her prospects of defending her Olympic title. She won the overall World Cup title early this month, becoming the first Korean speedskater, male or female, to do so. Lee amassed 1,055 points from a total of nine World Cups in the 2012-13 season, including an event in Calgary, Alberta in January where she set the world record at 36.80 seconds. She also became the first Korean speedskater to defend the world title on Sunday.

“If things work out like they are now, I think I can produce a good result in the next season too,” she said.

Mo’s performance at this year’s worlds, which also enabled him to defend his title, was somewhat surprising. His best record in the 2012-13 season had been a third in a 500-meter race at the first World Cup event.

“I had a lot of difficulties, but I tried to work hard with a positive mindset and was able to get the great result of defending the title,” Mo said, adding that Lee Sang-hwa was a big inspiration for him.

“The conditions in the ice rink in Sochi are similar to those at the Vancouver Olympics, so I have a great feeling [about the Sochi Olympics],” said Mo, who also won a gold medal in the 500-meter in Vancouver.

Lee Seung-hoon, 25, who won a gold medal in the 10,000-meter event and a silver medal in the 5,000-meter at the Vancouver Olympics, said that he will seek to beat the Netherlands, another powerhouse in speedskating, both in an individual event and the team pursuit in Sochi.

The three will take a break for the time being before beginning training for the Sochi Olympics next month.