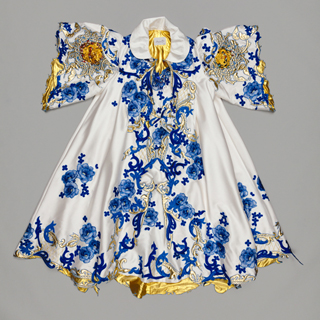 A fashion show piece with peony patterns donated to the National Folk Museum by the Andre Kim Design Atelier. Provided by the museum

The National Folk Museum of Korea at Gyeongbok Palace, central Seoul, has received several works by Andre Kim (1935-2010), the beloved Korean fashion designer who is known for his flamboyant and glamorous designs.

The Korean Committee for Unicef and Andre Kim Design Atelier donated 126 pieces by Kim designed between the late 1990s and 2010, the museum announced on Monday.

The Unicef donation of 74 pieces came in January 2012. Among them are everyday pieces that include dresses and suits made of various materials and colors.

The Andre Kim Design Atelier in Sinsa-dong, southern Seoul - a fashion company run by Kim’s adopted son Kim Jung-do - added 52 pieces to the collection on March 22 of this year. They include fashion show pieces that adopt traditional patterns of Korea and other countries. The company also donated cloth, fashion show clips and brochures.

“Starting April 24, we will show Andre Kim’s representative works along with videos and photographs,” the museum said.