The beauty of aimless wandering

The beauty of aimless wandering 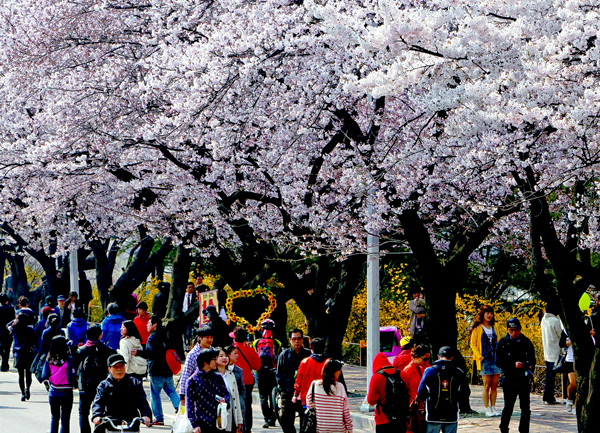 Recently a friend asked me over a beer: “Do you know how many seasons Korea has?”

“I’m sure you’ll say four, but it’s more like two these days,” I replied.

“Ah, but there are still four! Winter, winter, summer and summer.”

I can’t argue with that. But finally though, we have a touch of decent weather. For me, this is particularly wonderful news. Though I hate to admit it, my mood is greatly affected by sunshine, or the lack thereof. Plainly, I was born in the wrong country. My most ingrained memories of growing up in Manchester - a city even we English consider rainy - are of walking up the hill on the way to school, facing an ever-present soggy, blustery, grey onslaught.

But now I have a roughly three month long window in which to indulge my passion. For many years, I have enjoyed aimlessly wandering through town and going for hours in no particular direction. When I still lived with my parents, my mother would ask, “Where on earth are you going?” and more aggressively, “why?” I didn’t have a good answer to either question. There was something attractive about the act of strolling in itself.

I later discovered that I was far from alone. I found to my surprise that the wanderer may even refer to himself by a fancy French title: the flaneur. The flaneur was apparently an important fixture in the cultural ferment of late 19th century Paris, a kind of “gentleman idler,” who would pass his days among the arcades and boulevards, simply observing events without being involved in them.

Charles Baudelaire considered the flaneur different from the dandy, another man of leisure who spent his days wandering here and there: unlike the flaneur, the dandy wanted to be seen, and dressed accordingly. The dandy was a participant in the street scene, whereas the flaneur sought not to be. Now, this seems a little too theoretical (or, heavens, “intellectual”) to me; but if the distinction truly exists, then I’m quite sure I’m a flaneur and not a dandy. Dandyism costs money.

Not that Seoul doesn’t have many dandies. Actually, I suspect that Seoul may have one of the world’s highest concentrations of them. There seem to be many funkily dressed young chaps these days who just hang around Garosugil in Sinsa-dong, Gangam District or Hongdae hoping to be seen. A friend of mine who runs a social network for fashion obsessives tells me that they are most happy when some blogger or street photographer comes up and asks to take their picture.

But why just wander around a city like Seoul for no reason? Though it may sound like a waste of time, I learn most about this place when I’m just walking down a street, with my eyes open. This is especially true in the northeast of the city. Hyehwa-dong is pretty, Hwanghak-dong is gritty; and the route from Sewoon Sangga to Chungmuro, for instance, is like a lesson in the story of Korean development.

I’m also a fan of Jongno 3-ga, and the nearby hanok district of Ikseon-dong. It makes me happy to know that such a place can still exist in the middle of high-rise Seoul, like a clearing in the middle of a rainforest (though a row over redevelopment is taking place). I notice adverts offering hanok rental for a cheap price, and wonder what it would be like to live in one. Then there is the central church of Cheondogyo (literally, “Religion of the Heavenly Way”), which I took a curious peek into one day. They were singing songs, and worshipping in rows; it looked exactly like a Christian church, only without a cross. An old lady approached me and told me of her religion and its history, and her worries that her generation of believers would be the last.

Since I work completely alone, I have the rare luxury of setting my own schedule. I stroll around until I feel like writing something, and then find a cafe in which to do it. But in a way, I feel like walking is part of my work. Instead of reading about Cheondogyo in a book, I accidentally stumbled upon it, and saw what it was really like.

But there is also a great lightness in aimless wandering. Sometimes, it seems like everything we do as humans needs to have a purpose - we’re studying to pass an exam, we’re working to earn money, we’re being nice to a boss we don’t like to keep him happy. How much of this would we freely choose to do? When you just stroll around observing things, you see people living in that world. It looks interesting, but it feels wonderful to be detached from it for a while.


*The author is the Seoul correspondent for The Economist.