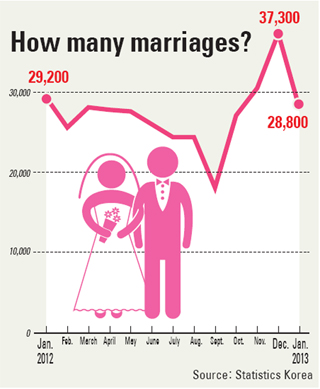 Miss Song, a 28-year-old office worker, plans on marrying her boyfriend next year before she turns 30. But the worries are starting to pile up.

“There are many things to consider before marriage,” Song says with a sigh. “Above all things, the biggest thing to consider is housing, for which a large sum of money is required.”

“We plan on getting a mortgage, which means we’ll have to pay installments on a monthly basis for many years,” Song said. “Preparing for marriage in Korea requires so much.”

Many Koreans in their 20s and 30s have similar concerns. Unlike Song, some are forgetting about marriage as a result.

According to Statistics Korea, there were a total of 28,800 marriages in January, a 1.4 percent drop from the same period the previous year. The figure is also a sharp decline from 37,300 marriages in December.

“The general reason why there is a decline is because the overall population of Koreans at the age of marrying has decreased,” said Kim Soo-young, an official from Statistics Korea.

“But there are also voluntary factors,” Kim said. “For example, it’s difficult to find a job due to the high unemployment rate, which could force young people to set aside their marriage plans until they are employed.”

Kim raised concerns that if the trend continues, it will deepen the country’s low birth rate problem and Korea’s aging society.

Yesterday’s data released by Statistics Korea also showed that the number of newborns in January was 44,800, which is a 0.4 percent drop compared to the previous year.