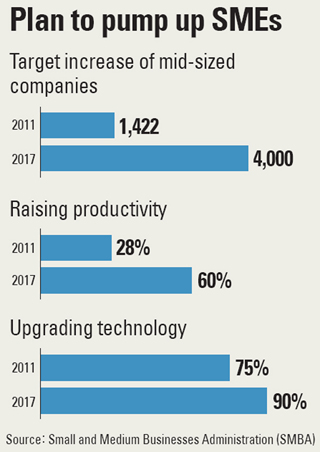 The Small and Medium Business Administration (SMBA) under the Ministry of Trade, Industry & Energy set its policy direction in line with the Park Geun-hye administration’s key commitments to realize the creative economy and economic democratization.

The main task for the SMBA for the year came out during the 2013 business reporting held at Blue House on Monday, which is to establish groundwork for a “creative economy,” focusing on stimulating youth entrepreneurship, boosting start-ups and helping failing businesses.

In regards to Park’s goal of economic democratization, the administration said it will also restore the growth ladder for small and medium enterprises (SMEs) to expand into mid-sized businesses and large conglomerates and resolve the difficulties of SMEs.

“The SMBA will commercialize creativity and build a start-up environment, where investment and divestment are brisk,” said Han Jung-wha, the newly appointed administrator of the SMBA during the business report.

The SMBA has set the three major tasks as establishing an ecosystem for the creative economy, fostering small- and medium-sized enterprises and rejuvenating small vendors and traditional markets.

Along with the major challenges, it presented creating foundations for startups at universities, cutting red tape and unnecessary regulations on SMEs, and analysis and integrated management of the support projects for SMEs as the three collaborative tasks.

In order to cut the red tape and unnecessary regulations hindering the businesses of SMEs, which Park has been emphasizing since the transition period, the administration will carry out a government-wide monitoring project with the national audit office of investigation.

In order to create a support system for a creative economy, the SMBA will conduct a national entrepreneurship project dubbed Inexhaustible Imagination Entrepreneurship Project from the second half of the year, intended to support the ideas of people with limited means, including homemakers and students.

The project is a part of the agency’s promotion of the so-called “idea entrepreneurship.” It will support a maximum of 50 million won ($45,210) of funds required to put into action the business ideas that were selected during the project.

In addition, the administration decided to support entrepreneurs who wanted to try their hand at starting a second business by expanding the abolishment of joint surety for a loan into nonbanking financial institutions.

At the same time, it will newly adopt the “Crowd Fund,” where small funds are collected from the general public so that all citizens can directly invest in venture capital.

To restore the growth ladder, the SMBA is set to remove stumbling blocks for mid-sized businesses to grow into large conglomerates and prepare policies with the goal of increasing the number of mid-sized companies from 1,422 in 2011 to 4,000 in 2017.

Specifically, the administration will be helping SMEs to stably expand into mid-sized businesses by gradually cutting back financial and tax support measures after they graduate from being SMEs.

It plans to build a merger and acquisition (M&A) brokerage network this July, and to expand the range of intermediary institutions to professional M&A accounting firms.