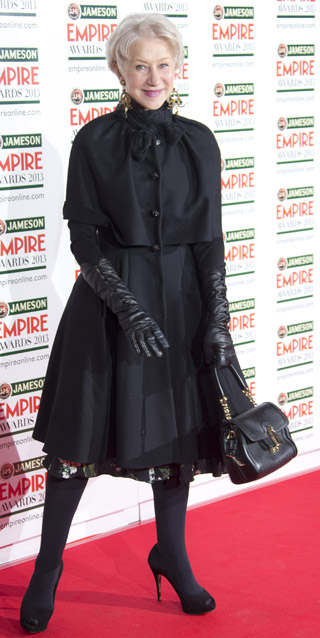 LONDON - British actress Helen Mirren has chided filmmaker Sam Mendes for failing to mention any women as influences during an acceptance speech at a British awards ceremony, a thorny issue after no women filmmakers were nominated for an Oscar this year.

His all-male list prompted Mirren, after collecting the Empire Legend Award, to express her disappointment that Mendes had no women directors in his list and that women were still not being recognized for their role in the film industry.

Mirren, 67, said the movie industry was “a really blokey world” when she started out more than 40 years ago and films sets were dominated by men.

“But nowadays that’s really changed, and it’s fantastic to see women and girls in the lighting department, cinematography, in the sound department, obviously in producing and writing,” she said.

“I hope and pray and I know that in five or 10 years’ time that when the next Sam gets up and makes his or her speech there will be two or three or four or five women’s names there. Go girls!” she told a cheering crowd.

So far only one woman filmmaker has won the Oscar for Best Director - Kathryn Bigelow in 2010 for “The Hurt Locker.”

Bigelow was only the fourth woman to be nominated for a Best Director Oscar after Lina Wertmuller for “Seven Beauties” in 1976, Jane Campion for “The Piano” in 1993, and Sofia Coppola for “Lost in Translation” in 2003.

This year there were no women among the five nominees for the Best Director award which went to Taiwan-born Ang Lee for “Life of Pi”.

Figures from the Center for the Study of Women in Television and Film at San Diego State University released in January showed that women still lag far behind men in reaching the top jobs in the film business.