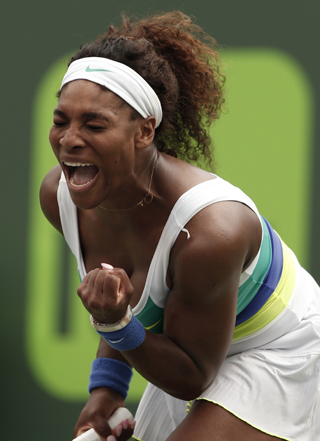 American Serena Williams celebrates during her victory over Dominika Cibulkova of Slovakia at the Sony Open in Key Biscayne, Florida on Monday.[REUTERS/NEWSIS]

KEY BISCAYNE, Florida - Serena Williams’ match was more than an hour old Monday before she began providing a soundtrack for her comeback.

“Come on!” she shouted at her fist through gritted teeth. Her demeanor transformed, Williams rallied past Dominika Cibulkova in the fourth round of the Sony Open 2-6, 6-4, 6-2.

The top-ranked Williams, seeking her sixth Key Biscayne title and first since 2008, was down a service break trailing 4-1 in the second set before she swept the final five games of the set. She also won the last three games of the match and served it out at love with three aces.

“I just felt slow and sluggish,” she said. “Then I started hitting errors, and I was getting frustrated. Then I tried not to be frustrated.

“I was just proud of myself because I didn’t throw any rackets.”

Williams’ opponent in the quarterfinals Tuesday will be No. 5-seeded Li Na, who beat wild card Garbine Muguruza 7-6 (6), 6-2.

No. 3 Maria Sharapova, a four-time runner-up seeking her first Key Biscayne title, reached the quarterfinals by beating No. 21 Klara Zakopalova 6-2, 6-2, while America’s Sloane Stephens started strong before losing the last nine games to be eliminated by defending champion Agnieszka Radwanska 4-6, 6-2, 6-0. That spoiled the possibility of a rematch in the semifinals between Williams and Stephens, who pulled off an upset when they met in January.

Since beating Williams, the No. 16-ranked Stephens is 2-5.

“There’s no specific thing that I’d say has happened or is not happening, but I don’t think it really matters,” she said. “I’m not really too concerned about winning or losing or any of that, I don’t think. My life has changed, yeah, but I wouldn’t say I’m in a panic or anything.” AP