Woods’ win in Orlando puts him back at No. 1

Woods’ win in Orlando puts him back at No. 1 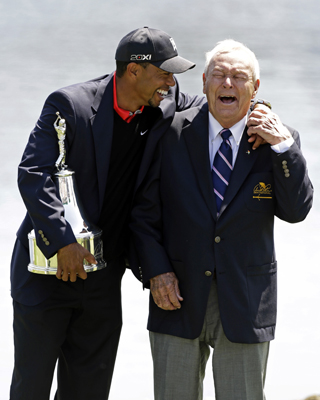 ORLANDO, Florida - The moment was vintage Tiger Woods, and so was his reaction.

Seconds after Rickie Fowler made a 40-foot birdie putt on the 12th hole to pull within two shots of the lead, Woods posed over his 25-foot birdie putt until he swept the putter upward in his left hand and marched toward the cup as it dropped for a birdie.

Fowler, standing on the edge of the green, turned with a slight smile as if to say, “What else can I do?”

Woods won the Arnold Palmer Invitational on Monday and returned to No. 1 in the world for the first time since October 2010, the longest spell of his career. After all that time, after so much turmoil with his personal life and his health, Woods looks as good as ever.

“It’s a byproduct of hard work, patience and getting back to winning golf tournaments,” Woods said.

He essentially wrapped up his eighth title at Bay Hill with an 8-iron out of a fairway bunker on the par-5 16th that easily cleared the water and landed safely on the green for a two-putt birdie. Woods dangled his tongue out of his mouth as the ball was in the air, another sign of his swagger.

Just like his other two wins this year, Woods never let anyone get closer than two shots in the final round. With a conservative bogey he could afford on the final hole, he closed with a two-under 70 for a two-shot win over Justin Rose.

Woods walked off the 18th green waving his putter over his head - truly a magic wand at Bay Hill - to acknowledge the fans who have seen this act before. His eighth win in the Arnold Palmer Invitational tied a PGA Tour record that had not been touched in 48 years.

This win had extra significance. He’s back to No. 1.

“If I get healthy, I know I can play this game at a high level,” Woods said. “I know I can be where I’m contending in every event, contending in major championships and being consistent day in and day out - if I got healthy. That was the first step in the process. Once I got there, then my game turned.”

A year ago, he came to Bay Hill without having won in more than two and a half years. He left this year having won six times in his last 20 starts on the PGA Tour.

Next up is the Masters, where Woods will try to end his five-year drought in the majors.

“I’m really excited about the rest of this year,” Woods said.

Woods fell as low as No. 58 in the world as he coped with the collapse of his marriage, a loss of sponsors and injuries to his left leg. One week after he announced he was dating Olympic ski champion Lindsey Vonn, Woods returned to the top of golf.

Asked if there was any correlation to his winning right after going public with his relationship, Woods smiled and said, “You’re reading way too much into this.”

Woods tied the tour record of eight wins in a single tournament. Sam Snead won the Greater Greensboro Open eight times from 1938 to 1965 at two golf courses. Woods tied his record for most wins at a single golf course, having also won eight times at Torrey Pines, including a U.S. Open.

“I don’t really see anybody touching it for a long time,” Palmer said while Woods made his way up the 18th fairway. “I had the opportunity to win a tournament five times, and I knew how difficult that was.”

Rose, who played the first two rounds with Woods, closed with a 70 to finish alone in second.

“He plays every shot like he plays them on Sunday,” Rose said. “His intensity is the same on Thursday often as it is on Sunday, and that makes Sunday a lot less different for him. He plays in that kind of atmosphere far more regularly than a lot of guys do, and it’s an adjustment for most of us. It’s a known for him.”

Rory McIlroy had been No. 1 since he won the PGA Championship last August. AP