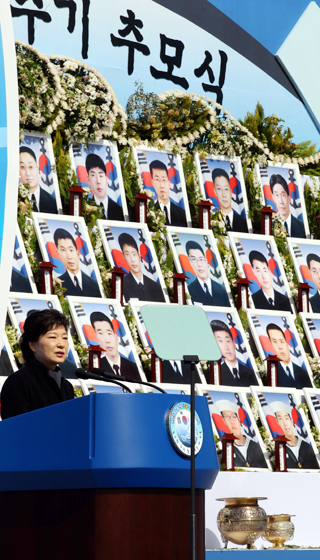 President Park Geun-hye yesterday speaks in front of photos of 46 fallen sailors during a memorial for the third anniversary of the sinking of the warship Cheonan at the National Cemetery in Daejeon. [Joint Press Corps]

North Korea must immediately end its vicious attacks and give up the belief that nuclear weapons are needed to protect its ruling regime, South Korea’s President Park Geun-hye said yesterday at a commemoration of the third anniversary of the sinking of a South Korean warship.

The government yesterday held a memorial for the sinking of the warship Cheonan at the National Cemetery in Daejeon. The Ministry of Patriots and Veterans Affairs hosted the event and about 5,000 people including Park, senior government officials, top military brass and families of the fallen sailors attended the ceremony.

“After conducting nuclear tests and missile launches, North Korea now imperils our security and peace by threatening to scrap the armistice agreement,” Park said. “Marking the third anniversary of the Cheonan’s sinking, I strongly urge the North to change. It must break away from the belief as soon as possible that a nuclear arsenal will protect its regime.”

She also condemned the North for focusing its energy and resources on nuclear weapons while its people are starving. “The only path for the North’s survival is giving up nuclear arms, missiles, provocations and threats and becoming a responsible member of the international community. North Korea must immediately stop provocations which invite the vicious cycle of reprisals and our youngsters’ sacrifices and choose the path of peace and prosperity for the Korean Peninsula.”

On the night of March 26, 2010, the South Korean warship Cheonan sank off Baengnyeong Island near the western maritime border, killing 46 sailors on board. The South Korean government, in cooperation with an international team of investigators, later concluded that the warship was torpedoed by the North. Pyongyang denies the charge.

Promising that the sailors’ sacrifices will never be in vain, Park said it is the government’s most important duty to create a safe and peaceful homeland for the young. She also promised to create a country where the people who sacrificed their lives to protect the nation will receive fair treatment and respect.

“The strongest power that protects a country is the people’s firm sense of national security and unity,” Park said, stressing that the ruling and opposition parties must work together to maintain security.

Heads of the ruling Saenuri Party and the main opposition Democratic United Party attended the commemorative ceremony yesterday, but no member of the leadership of the Unified Progressive Party came. UPP Chairwoman Lee Jung-hee went to South Chungcheong to visit a unionist held in the Seosan Detention Center.

The UPP has been reluctant to agree with the government’s conclusion that the North torpedoed the Cheonan. While the Saenuri Party and the DUP yesterday criticized the North for the attack and demanded an apology, the UPP issued a short statement saying a tragedy like the “Cheonan incident” must never happen again.

Memorial events took place in 34 cities to commemorate the attack on the Cheonan. Ceremonies also took place at 45 alma maters of the slain sailors. Defense Minister Kim Kwan-jin sent a letter to the military requesting the soldiers to remain ready for any provocation by the North.

“Only our strong readiness and threat of absolute retaliation can deter the enemy from staging a provocation,” Kim said. “Our military has persevered, and the people have visited the attack site, confirmed the nature of the Cheonan’s sinking and strengthened their will to protect this country.”

Commemoration events took place at naval bases around the nation, and naval forces vowed to strike back at any provocation in South Korean waters. The second fleet also conducted drills. The Navy designated March 26 as the “Day of Retaliation” for remembrance.