Board of directors strips MBC president of his post

Board of directors strips MBC president of his post 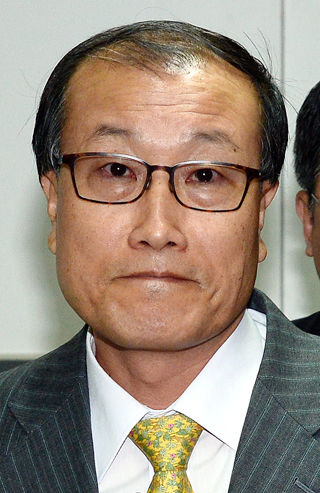 The Foundation of Broadcast Culture (FBC), the biggest shareholder of broadcasting company MBC, announced yesterday that its board of directors voted 5-4 to strip MBC President Kim Jae-chul of his top post at a temporary board of directors meeting. No board members abstained.

The decision marks the first time for the institution to fire the head of its network. The move comes after three previous bills to dismiss him failed.

The board of directors pointed to Kim’s heavy-handed way of nominating executives of subsidiary TV channels earlier this month and his reluctance to consult with board members about the nominations for the reason of the voting outcome.

“I figured that the chairman of the board agreed [on the nomination],” Kim was quoted as saying by Yonhap News Agency during a one-hour statement. “I admit that I didn’t comply with the administrative guidelines.

“I failed to fulfill my responsibility as the president appointed by the Foundation of Broadcast Culture. I made a mistake because of time constraints and a lot of requests asking for preferential treatments,” the 60-year-old former chairman of the Korean Broadcasters Association said.

The FBC also stated that Kim has violated management rules and abused his influence, hurting the public standing of the network.

On top of the appointment issue, the MBC labor union has long accused the disgraced head of interfering with fair and balanced news coverage and pushing favorable reporting of the former Lee Myung-bak administration, staging the longest-ever media strike of 170 days, which ended in July last year.

The labor members also criticized Kim for firing some of those who joined the strike.

The network union members welcomed the decision and said in a statement that “It’s long overdue but surely the right decision to make,” adding that “The FBC should make the utmost effort to replace him with a qualified president.”

The opposition Democratic United Party said, “The investigation should be conducted to verify a lot of allegations involving Kim. And MBC should ease the pain still left in the labor members’ hearts and reinstate fired members.”

The ousting decision will not be fully enacted until the bill passes at a general meeting of stockholders scheduled for next month.

“We plan to recruit a new head as soon as possible,” said Choi Chang-young, director of the FBC.