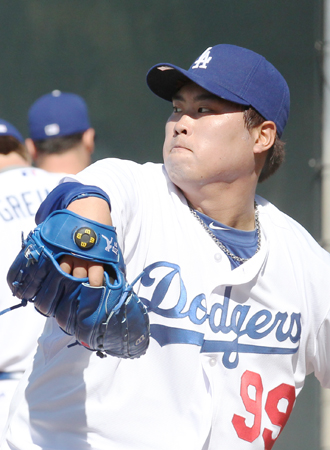 Korean pitcher Ryu Hyun-jin will start the second game of the season for the Los Angeles Dodgers, according to the Major League club on Tuesday.

The Dodgers will host the 2012 World Series-winning San Francisco Giants for the first three games of the season between April 1 and 3. Dodgers’ ace Clayton Kershaw, 25 years old, will pitch in the team’s season opener while Josh Beckett, 32, will start the third game, the Los Angeles-based team said.

Ryu was initially expected to make his Major League debut by starting the team’s fifth game against the Arizona Diamondbacks on April 13. But injuries have ruled out Zack Greinke, 29, and Chad Billingsley, 28, from the first three games. Greinke will start the fourth game against the Pittsburgh Pirates on April 5, the team stated.

Billingsley, who has sustained an index finger injury, will pitch in a Minor League game first and will get into the rotation later in the season, the team added.

The recent decision makes Ryu the first Korean pitcher to start a home game in his first season in the Major League. Cho Jin-ho, who pitched for the Boston Red Sox, and Bong Jung-keun, who played for the Atlanta Braves and Cincinnati Reds, also earned a spot in the rotation in their debut MLB years but not in an opening home game.

Ryu, 25, had two victories and two losses in six preseason games, with an ERA of 3.86. He surrendered 10 runs and 10 hits, including a homer, over 23 1/3 innings. He struck out 23 and allowed four walks. He’s scheduled to make a final preseason start against the Los Angeles Angels tomorrow morning Korean time.

Speaking to reporters on Tuesday, Ryu said that he’s feeling the heat.

“I thought it’d be fine starting the fourth game. I feel a bit of pressure starting the second, as the opposing team will send out a good pitcher,” Ryu said, according to Sports Hankook.

In the game against the Giants, Ryu is expected to face off against Madison Bumgarner, who went 16-11 last year. Bumgarner, 23, won the second World Series game last year, shutting out the Detroit Tigers over seven innings.

Ryu says he’s up to the challenge, however.

“When I was in Korea, I thought I’d like to strike out San Francisco catcher Buster Posey,” Ryu said.

“I want to win. If I pitch well in the first game, I think I’ll be able to maintain a good pace.”