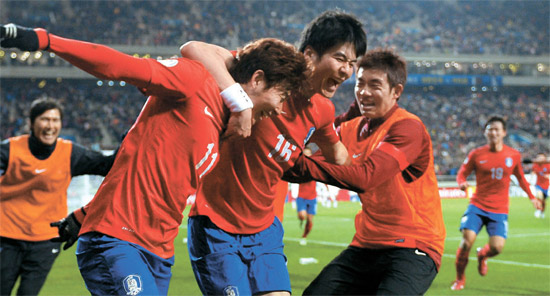 With the victory, Korea briefly surged back to the top of the table in Group A before Uzbekistan reclaimed the lead with a 1-0 home win over Lebanon later the day. Korea has 10 points from five games, a point behind Uzbekistan who played one more game.

Qatar remains in fourth with seven points from six games, trailing Iran on goal difference. The two Middle East teams will face off against each other in their next match in June. Korea will travel to Lebanon in June. Two best teams in the group will get an automatic berth to Rio de Janeiro.

"I was amazed that Son Heung-min showed his great ability as a football player in only 15 minutes and I expect a lot from him for the remaining games and he will grow stronger," Korea coach Choi Kang-hee told reporters.

"It was such a dramatic victory. Korean players did not give up till the very end and were strong willed. For that I am very grateful."

The third place finishers can also book a berth if they win through two playoff rounds against another Asian side and a South America team.

But the Koreans are unlikely to require that route after a rousing finale in Seoul on Tuesday which followed a drab first half where the Qataris affectively strangled the life out of the contest.

Poor composure by the home side in the final third was also to blame for the early stalemate with Korean coach Choi turning to his bench early in the second period and the introduction of Lee Dong-gook changed the game.

The more direct approach following the arrival of the 33-year-old forward led to the opening goal with a floated ball into the penalty area expertly flicked home by Lee Keun-ho on the hour mark.

The Asian Player-of-the-Year, currently completing his military service at home, was afforded some rare space to loop his header over the despairing dive of Qatari goalkeeper Qasem Burhan.

The celebrations that followed perhaps went on too long, though, as Qatar made a rare foray forward into the Koreans half three minutes later and Khalfan Ibrahim was afforded too much room on the edge of the area to toe poke a cheeky effort in at the near post.

Korean goalkeeper Jung Sung-ryong, left unemployed for most the match, will feel he could have done better with the playmaker's effort having got a hand to the low strike.

With the Qataris holding firm despite the huge waves of Korean pressure, coach Choi turned to his bench again to introduce Son for the final minutes, much to the pleasure of the home fans, and the poster boy came up with the goods in a dramatic finale.

"Tonight, we showed that my team is good enough to advance to the World Cup in 2014," an emotional Qatari coach Fahad Thani said.

"I am dissatisfied the way referees ruled today. They gave one more minute than we were supposed to and it worked in Korea's favor."