Consumer confidence bumps up a bit in March

Consumer confidence bumps up a bit in March 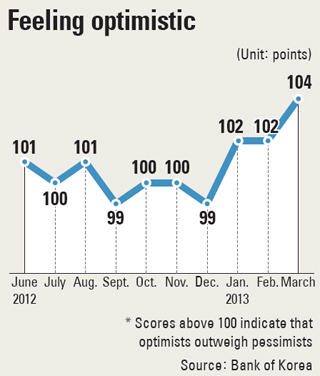 The consumer sentiment index (CSI) rose to its highest level in 10 months in March, a sign that Korean consumers are regaining confidence and household spending will grow despite a generally gloomy economy outlook, data by the Bank of Korea showed yesterday.

The index, released by the central bank, measures consumers’ sentiment about the current state of the economy and their financial prospects. Scores above 100 indicate that optimists outweigh pessimists.

“The gain in overall CSI may have been boosted by improved indicators for the manufacturing industry released in February coupled with improving conditions of global markets led by the U.S. and China,” said Jeong Gui-yeon, an official at the Bank of Korea.

Views on the labor market improved, too, as expectations for job opportunities in the next six months jumped to 93 in March from 90 a month earlier, although the figure is still below the crucial 100 mark.

Meanwhile, the index for whether current household debt will increase dipped one notch to 102, a positive sentiment. The public’s expectations are generally high that the launch of the Park Geun-hye administration’s “people’s happiness fund” will ease escalating household debt. The index that gauges expectations for household debt over the next six months also improved.

The fund, which will be officially launched tomorrow by the Financial Services Commission, aims to write off overdue debt owed by low-income households. Around 330,000 people with long-term debt are expected to benefit from the fund.

More consumers are now betting on real estate prices to go up in the next six months. The index that gauges expectations for the real estate market was 101, up 6 points from February.

Respondents expected inflation in the coming 12 months to stay at 3.2 percent, the same level as in February.