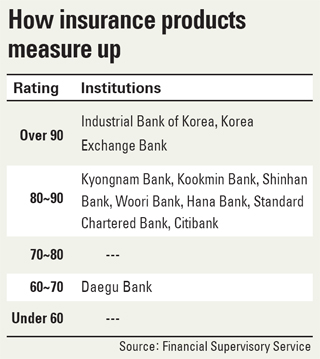 The terms and features of variable insurance products offered by the Korea Exchange Bank (KEB) and the Industrial Bank of Korea (IBK) were found to be good while the opposite was found for Daegu Bank, the Financial Supervisory Service said yesterday.

Last November and December, the FSS went “mystery shopping” by visiting 200 branches of the country’s 10 banks and asking bank employees questions about their insurance products as if they were customers.

The FSS evaluated 18 different elements related to the insurance product like whether companies warned customers of risks involved or whether refunds would be available.

Variable insurance products refer to policies in which a portion of the premium is invested in shares, bonds or other instruments and investment profits, if there are any, are given back to customers. These products have a reputation for confusing and sometimes deceiving customers by fixing commission rates.

The products offered by KEB and IBK received more than 90 points in the FSS evaluation while seven other companies including Kyongnam Bank and Kookmin Bank received ratings between 80 and 90 points.

Daegu Bank received the lowest points, between 60 and 70.

“Companies with poor scores [like Daegu Bank] will have to submit an improvement plan and we will follow up to see whether the plan is being fully carried out,” said an FSS official.

In the fourth quarter of last year, variable insurance sales reached 156.3 billion won ($140 million), up from 91.4 billion won in the first quarter.