Gangnam gets networking center for start-ups

Gangnam gets networking center for start-ups 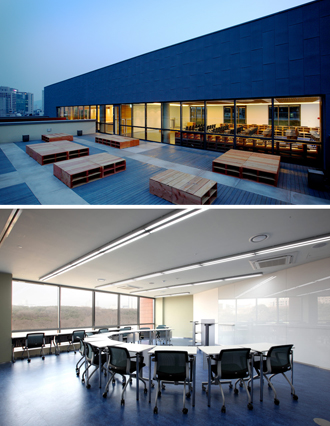 From Top; the exterior of D.CAMP; one of its conference rooms. Provided by the foundation

The start-up center, D.CAMP, is run by Banks Foundation for Young Entrepreneurs, which was launched in May 2012. Banks including Woori, KB Kookmin and Shinhan are scheduled to invest a total of 500 billion won ($450 million) in the center between 2012 and 2014.

The primary work of the foundation is to create and establish an infrastructure for young entrepreneurs to start business and to offer loans and investments. D.CAMP creates a space for young start-ups.

“Focusing too much on financial support could lead to an excessive wave of start-up companies and private businesses that would probably end up fueling competition that wouldn’t benefit anyone,” said Bahk Byong-won, head of the foundation and Chairman of Korea Federation of Banks. “Our goal is to create an environment where all participants could benefit positively through creative work and exchanges.”

The main target of D.CAMP is to create an environment where entrepreneurs can expand their human networks, exchange ideas and get mentoring on their business goals and pursuits.

The center is modeled after similar centers around the globe including General Assembly in New York, Y Combinator and 500 Startups in California, Seedcamp in London and JFDI in Singapore.

At the opening ceremony several big names in IT start-ups participated including Park Byeong-yeop, founder and Vice Chairman of Pantech, Lee Sirgoo, Kakao Talk CEO, as well as Daniel Sihn, co-founder and CEO of Ticket Monster.