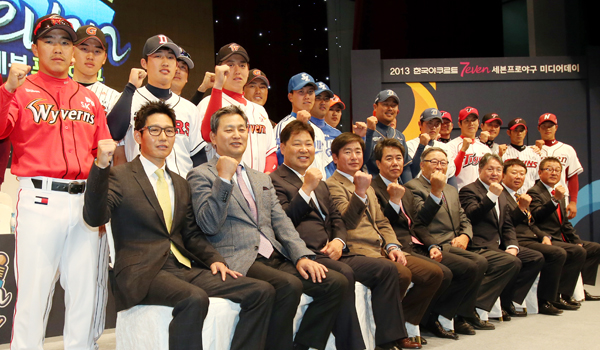 Players pose with the managers of the nine Korea Baseball Organization teams during a media event on Monday in Seoul, ahead of the 2013 KBO season that will kick off tomorrow with four opening games. [NEWSIS]

The two-time defending Korea Baseball Organization champions, the Samsung Lions, may be suffering from a serious lack of confidence as the league kicks off its first-ever nine-team season on Saturday.

The team suffered four straight losses in the preseason this month, leaving the six-time champions to finish at the bottom of the table with 2-6-3.

The first four games of the season will see the Lions squaring off against the Doosan Bears at home in Daegu and the runner-up SK Wyverns hosting the LG Twins in Incheon. The Lotte Giants will host the Hanwha Eagles in Busan while the Kia Tigers will face off against the Nexen Heroes in Gwangju. The teams will play the same opponents in the same places on Sunday.

The goal of Lions manager Ryu Joong-il has been an obvious one: winning the title for a third straight time. But he sounded less confident when the league gathered the managers and players of the nine clubs for a preseason media event early this week.

The manager expressed concerns about holes in his pitching resources.

“I’m sorry that Rick VandenHurk can’t pitch in the early season,” Ryu said, referring to the 25-year-old Dutch pitcher who has joined the Lions for the season. VandenHurk suffered an elbow injury at spring training camp in Japan and has not pitched since.

Aneury Rodriguez, another foreign arm the Lions brought in before the season, also came up short in the preseason with one victory and one loss, and an ERA of 6.75.

The Lions brought them in after releasing Mitch Talbot and Brian Gordon, who combined for 25 wins last year.

“Overall, we have been less powerful than last year in pitching, but we’ll do our best in each game,” he said. “We won’t give up.”

The Tigers, which finished fifth last year, and the Bears, the fourth-placed team in 2012, have emerged as the new favorites to win the title, coming first and second in the preseason, respectively.

Sun Dong-yul, a former franchise star for the Tigers who is seeking his seventh title with the team and first as a manager, said that he feels “terrific.”

“We had such a hard time last year because there were so many injured players,” he said. This year, there are no injuries and the players are in good shape, which likely contributed to the team’s record in the preseason.

“We’re going to carry on the momentum and pull it off this year.”

Lee Man-soo, the Wyverns manager, said that his team “has almost aligned all the pieces in the puzzle.”

“SK has advanced to the Korean Series six times, and we’re going to do our best to set the [team] record of a seventh Korean Series,” Lee said. “We didn’t win the title last year, but we’ll get it this time to give back to the fans.”

The Busan-based Giants have boasted the largest fan base in the KBO but will have some competition in the region for the first time this year.

The Dinos are based in nearby Changwon, which has a population of 1.1 million. They’ll be making their debut at home in a two-game series against the Giants on Tuesday and Wednesday.

Dinos manager Kim Kyung-moon said they will help increase the baseball fan base in Korea over the long haul. “We lack many things, but for our regional fans, we will have a good showdown with the Lotte Giants. Only then will the number of baseball fans increase. We’re going to have good games so that the regional fans can have a good time.”

The nine teams confirmed their 26-member opening game rosters yesterday. The 11 rookies include Kim Kyung-keun, an outfielder for the Wyverns, and Cho Heung-seok, a Giants outfielder. The Lions, Bears and the Heroes have fielded no rookies.

All nine clubs have picked foreign players as pitchers for the second straight year.

With the introduction of the Dinos, the number of games has grown from 532 last year to 576 this year. At the same time, the number of games per team has dropped by five to 128. The games will start at 6:30 p.m. on weekdays and at 5 p.m. on weekends and holidays. The Sunday games between opening day and May 5 will be held at 2 p.m. In July and August, the game time on weekends and holidays will be pushed back an hour to 6 p.m. because of the summer heat.

The All Star game will be held on July 19.