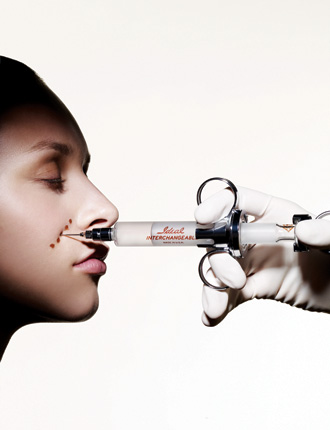 Amid the constant search for the next big growth engine, one of the most obvious answers can be seen on the streets of Korea every day. It is the 50-year-olds and over, who are rapidly creating a demographic shift. The fact that Korea will be one of the fastest aging nations over the next 15 years is irreversible. The 65-plus population has risen from 7.2 percent in 2000 to 10.9 percent in 2010 and is forecast to surge to 15.7 percent by 2020.

But that doesn’t mean a nation full of moribund individuals. Indeed, those at the forefront of the population makeover are already out splurging on their appearance and well-being as looks have become a measure of one’s self-discipline. In short, the “active senior” has arrived and will be present for some time.

In 2011, Korea’s anti-aging market totaled 11.9 trillion won ($10.7 billion) with an annual growth rate of 10.1 percent. This has not been overlooked entirely by the business community. In a survey by Sericeo, the knowledge-sharing forum, 84.5 percent of the CEOs predicted that anti-aging consumption will be a bigger trend. Thus, where the risk lies is not recognizing the potential bonanza in keeping individuals youthful, sophisticated and healthy, but underestimating the potential scale and scope of the industry.

What is becoming increasingly evident is a wider playing field, with the medical, consumer goods and service industries entering each other’s area of expertise and intensifying the competition from both the customer and technological perspective.

So far the most prevalent anti-aging products are for the skin, the largest and easiest treated organ of the body. In the last ten years, skin aging cosmetics have accounted for about 50-80 percent of the anti-aging patent applications annually.

The cosmetics industry, which is led by global companies, has sped up product development aimed at seniors. For example, L’Oreal and Proctor & Gamble have established their own distinct anti-aging theories based on 10 to 20 years of clinical trials and have in turn successively launched highly functional products. In the future, edible cosmetics touted as “beauty foods” will likely appear.

More aggressive skin treatments, of course, are widely available. They include Botox injections, micro-needle therapy, laser treatments and chemical peels. For new businesses, this means that homecare beauty equipment that has similar effects as going to a dermatologist should be considered.

Innovation in technology convergence and bio-technology are also boosting the development of the anti-aging industry. Recently, a series of cutting-edge cosmetic products, including stem cell cosmetics, gene-activated cosmetics and peptide cosmetics have been launched. And products that graft IT technology such as remote life-care consulting, and beauty and skin diagnosis applications for smartphones are also gaining attention.

In the service industry, wellness resorts in advanced countries that offer alternative treatments including meditation, yoga and spas fused with modern medicine including diagnosis, exercise regimes and new diets have already become popular.

In particular, the discovery of the anti-aging effects through mental wellness is expected to further diversify business opportunities

Purchasing patterns in the anti-aging market indicate that spending rises along with discretionary income. This has wide implications for the market as the middle class multiplies in emerging economies such as China and Russia.

Korea’s domestic anti-aging industry lacks global competitiveness in terms of scale and brand power, but should be able to catch up in a relatively short period of time if the business community and government react promptly and aggressively.

The nation’s traditional engines such as IT, automobiles, shipping and chemicals, are vulnerable to global economic cycles. Anti-aging products are more recession-resistant. They offer a boost to appearance, self-confidence and health at various price points and should generate steadier sales than items with big price tags.

For companies, they must recognize that the anti-aging market is a future growth driver. In particular, investment and support are desperately needed in the consumer goods industry, which can differentiate products by incorporating an anti-aging function. In addition, the fine chemicals industry can create high added value through the development of high-functional ingredients.

Marketing will be just as vital in deciding the appropriate market niches. When drafting an entry strategy for the global market, the obvious starting point would be the Asian markets, mainly the Chinese market, where skin types are similar to Koreans, and both income level and population aging are accelerating.

European countries and the United States also will experience their own tidal wave of retirees, creating huge interest in products for senior citizens. For those countries, could Korea’s capacity for technological innovation create software and devices that promote well-being as well as assist in daily household tasks?

As for the government, it must nurture the anti-aging industry as a future growth engine through R&D support, regulatory reform, establishment of industrial clusters and overseas marketing. Furthermore, aging research institutes like those in the U.S. and Japan should be established to lead basic research, which requires vast funding.


*The author is a research fellow at Samsung Economic Research Institute.