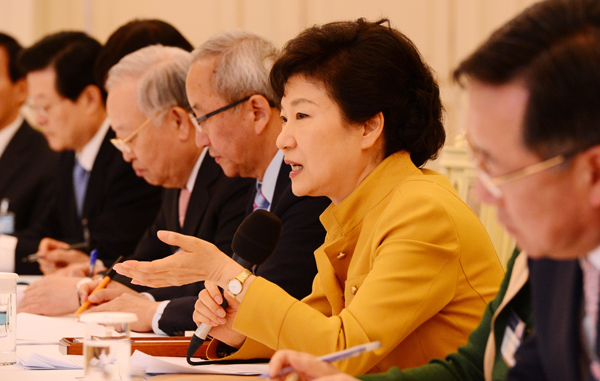 The Park Geun-hye administration’s decisions to launch a supplementary budget and try to pump up the real estate market demonstrates that salvaging the sinking Korean economy is its first priority and so-called economic democratization will have to come later.

The recent banking crisis in Cyprus reminded the technocrats that the threat of euro zone contagion remains real, especially an economy like Korea’s with its almost complete exposure to external uncertainties.

Exports have been losing steam on a barely growing global economy and the depreciation of the Japanese yen, which makes Japan’s exporters more competitive than before.

According to the Bank of Korea yesterday, the nation’s current account posted a surplus for the 13th consecutive months in February of $2.7 billion, $380 million more than in January.

But the surplus was not the result of rapidly growing exports but rather a drop in imports, which indicates that the domestic market is weak.

Last month exports shrunk 7.9 percent from the previous year to $42.2 billion. Even when compared to January outbound shipments were $5 billion less. Imports saw an even sharper drop of 11 percent on-year to $39.6 billion.

The central bank blamed the figures on shorter working days due to the Lunar New Year holidays.

“Last year the Lunar New Year holidays were in January whereas this year they were in February,” said Cho Yong-seung, a Bank of Korea official.

Regardless of working days, major export items that helped the Korean economy pull out of the global financial crisis of 2008 contracted, largely because of competition from companies in Japan selling in the weakened yen. Automobile exports dropped 15.6 percent on-year.

“Although there have been various factors affecting the market here including the Japanese yen depreciation and the heightening geopolitical tension between the two Koreas,” said Jeong Yong-taek, an analyst at KTB Investment & Securities, “the market has been frustrated by an absence of any policy plans even though the new administration officially launched late last month.

“This was a particularly stark contrast to the U.S. and Japan,” Jeong continued, “where the governments have been aggressively pursuing liquidity supply and currency depreciation [to help the economies] while the Korean government is still unorganized and stuck in political limbo.”

Areas that needs urgent attention of the government is the domestic market, namely consumer spending and the real estate market.

The government could try to stimulate the domestic market. But consumer spending is weak due to fears of a decelerating economy and a record-level of household debts.

The central bank warned in a report released earlier this week that frozen consumer spending will not only lower the nation’s economic growth in the present, but in the long run it will also dent the nation’s potential growth.

One of big reasons spending is declining is the household debt burden.

The real problem is that household debt is deteriorating rapidly. According to the Financial Supervisory Service, the overdue rate on household loans borrowed from commercial banks reached its highest level in more than seven years. The overdue rate was 1.04 percent as of the end of last month, up 0.05 percentage point from the previous month. The last time the delinquent rate was higher than that level was in October 2006 when it was 1.07 percent.

One of the main reasons for the rising delinquency rate is the frozen real estate market. Many Koreans borrowed to invest in real estate, which was a lucrative area before the 2008 global credit crisis.

This has prompted the Park government to announce measures to help the real estate sector.