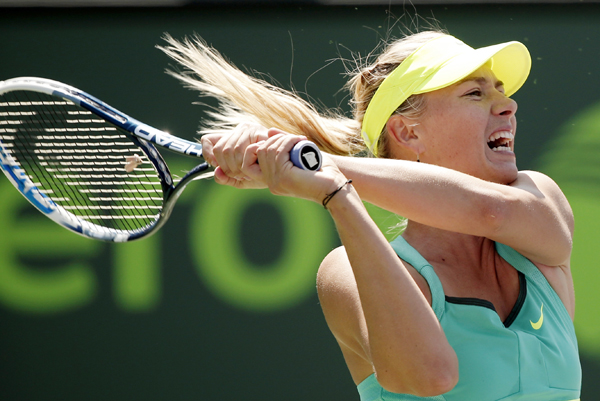 Maria Sharapova of Russia hits a backhand to Sara Errani of Italy during their quarterfinal match at the Sony Open tennis tournament in Key Biscayne, Florida, Wednesday. [REUTERS/NEWSIS]

KEY BISCAYNE, Florida - The grunts were long and loud in the final game, as if Maria Sharapova was pushing a couch across nearby Crandon Beach.

Trying to win the Sony Open must feel that way to Sharapova, a four-time runner-up. She returned to the semifinals Wednesday despite a patchy performance, beating Sara Errani 7-5, 7-5.

Sharapova made 57 unforced errors, including 13 double-faults, and overcame three set points in the second set. The two sets took two and a half hours, and a flurry of mistakes by both players left spectators groaning.

Sharapova had the last laugh, whacking a forehand winner on match point.

“She really made me work for this match,” Sharapova said. “I had to dig deep - so many opportunities, a few ups and downs. I’m definitely happy to get through another one.”

The men’s quarterfinals featured eight Europeans for the first time, and in the opening match, No. 3 David Ferrer of Spain rallied past unseeded Jurgen Melzer of Austria, 4-6, 6-3, 6-0. Ferrer’s opponent Friday will Tommy Haas of Germany, who beat No. 11 Gilles Simon of France, 6-3, 6-1.

The 34-year-old Haas became the oldest man to beat a No. 1 player in a completed match in 30 years when he upset three-time champion Novak Djokovic on Tuesday night.

Sharapova faced Errani in a rematch of last year’s French Open final, which Sharapova won to complete a career Grand Slam. But she has never won Key Biscayne, losing the final in 2005, ’06, ’11 and ’12.

“I’ve been so close to winning,” Sharapova said. “I would love to win this. I’ve been coming to this tournament since I was a little kid as a spectator. To be playing here, to be doing so well and getting to that stage, I sure hope I can go further this time.”

The quarterfinal took place with the stadium half empty despite postcard weather. Attendance is down about 7 percent from last year, and promoters blame the absence of Rafael Nadal and Roger Federer.