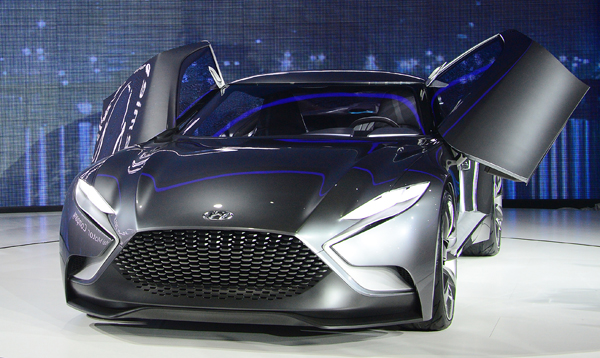 The ninth Seoul Motor Show officially kicks off today with more than 40 new cars being introduced to Korean auto lovers.

Organizers said that 45 cars will be introduced to Korea, while nine of them will be making their world debuts. Most of the new cars will be concept cars, so analysts will be watching for design trends and future technologies. Employing the slogan “With nature, for the people,” the event is geared to highlight environmentally friendly cars, but spiffy-looking concept cars and high-tech models will probably steal the spotlight.

Among the participating companies, Hyundai Motor, the nation’s largest automaker, has taken the largest booth of 6,800 square meters (73,195 square feet). It will display 38 models.

The automaker will unveil its concept sport coupe HND-9 for the first time and also introduce the successor of its large commercial truck Trago.

The HND-9, which is the ninth concept model developed by Hyundai’s R&D Center in Namyang, Gyeonggi, is a rear-wheel drive powered by a 3.3-liter turbo Gasoline Direct-injection engine and eight-speed auto transmission. It delivers a maximum of 370 horsepower.

“The HND-9 will suggest a future direction of the sport coupe,” Hyundai Motor President Kim Choong-ho said yesterday at a press briefing. “We will prepare the stage for a special festival with customers during this show.”

Kia Motors will showcase its CUB concept coupe, also known by the codename KND-7, for the first time, while its concept hybrid Cross GT (KCD-9) will make its Asia debut. A five-door version of the K3 compact and a totally altered Carens will also be shown.

GM Korea, the nation’s third-largest automaker, will show 23 models including the Chevrolet Spark EV, which is being introduced to Asia. The city car equipped with a 20 kilowatt hour lithium-ion battery can churn out 130 horsepower with 53.3 kilogram-meter torque.

Renault Samsung Motors will display the QM3, a crossover utility vehicle that is known as Renault Captur overseas. It will go on sale in the Korean market in the second half of this year. The automaker will also highlight EVs, such as the SM3 Z.E. and Twizy.

Ssangyong Motor, the nation’s smallest automaker, will show a large premium SUV, the LIV-1, and the Chairman W Summit, an upgraded version of its flagship Chairman W limousine for the first time. The automaker, which is now part of the India-based Mahindra Group, will also show the SIV-1, another concept SUV.

“The Chairman W Summit will lead the full-size luxury sedan market, competing with imported cars, while LIV-I shows our ambition to step up as a global brand,” said Ssangyong Motor CEO Lee Yoo-il.

Foreign automakers will introduce some of their cars for the first time in Asia. Notable cars include the Lexus LF-LC and Toyota FT-BH, both hybrid-based concepts from Japan, while the BMW i8, a plug-in hybrid concept, and 4-Series Coupe are also catching attention. Infiniti will unveil the LE, a five-door luxury electric vehicle.

Visitors to the show will also able to see various models that will likely go on sale in Korea in the future, such as the Mercedes-Benz A-Class, BMW 3-Series GT, Volkswagen Polo, new Lexus IS, Toyota Avalon, Jaguar F-type, Porsche Cayman and Maserati Quattroporte.

Organizers said the biennial Seoul Motor Show will have various programs and events.

The 2013 Automotive Week will also be held until Sunday in a special booth, while hand-made cars from college students will be also displayed.

From April 1 to 5, visitors can test drive environmentally friendly cars offered by carmakers on a 3.8-kilometer-long (2.4 miles) course around the Korea International Exhibition Center (Kintex) in Goyang, Gyeonggi. Job fairs hosted by Korea Automobile Importers and Distributors will start from April 5.

Automakers have planned interesting events. Hyundai will offer a concert and movie preview for visitors, while other carmakers are bringing entertainers that appeared in their advertisements for autograph events.

The biennial event is the only local auto show that is approved by the International Organization of Motor Vehicle Manufacture, or OICA.

This year’s show will be the largest ever with 384 companies from 14 countries showing off products at Kintex, until April 7. More than 300 cars will be shown by 29 automakers in a 102,431-square-meter space, roughly the equivalent of 15 soccer fields.

Industry insiders said that although the Seoul Motor Show has yet to become a world-class event, it can still perk up a sluggish domestic car market and give a chance to car makers to spruce up their brand images.

Some 1.2 million visitors are expected to visit the 10-day event. Organizers say that at least 15,000 buyers from overseas will be here to make deals with local companies that will be worth something like $1.5 billion.