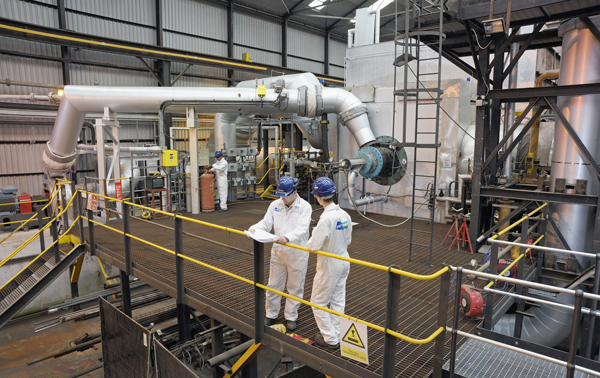 Doosan Babcock, the U.K. subsidiary of Doosan Heavy Industries, was the first company to develop carbon dioxide capture and storage technology in 2009. The company plans to commercialize the new development.

Doosan Group Chairman and CEO Park Yong-maan has emphasized the need to prepare for a period of low growth by “strengthening core competitiveness” and “advancing the business.” The group must improve in all areas that fall below the highest standards, he said.

The company plans to secure various eco-friendly technology and products in water treatment and wind power generation in order to stand one step ahead as a global leader.

Its acquisition of the British wastewater treatment company Enpure was part of its efforts to be more competitive.

Doosan also began using Reverse Osmosis (RO) technology and saw an increase in water facility construction orders after purchasing Enpure, which has the world’s best preprocessing equipment and manufacturing technology. Now, it will be able to diversify its business portfolio into water and sewage operations.

In addition, Doosan plans to increase its fresh water business operations related to MED (Multi-Effect Distillation) by building an MED water plant in Saudi Arabia. The Middle East is still the region with the most demand for water purifying equipment, taking up over 75 percent of the market.

In its main business of power generation facilities, Doosan is planning to further advance in India and Southeast Asia, which are emerging as new markets where growth is expected. Last year, the company received orders in Kudgi and Lara in India for coal thermal power generation projects, which are worth 1.5 trillion won ($1.4 billion). To grow further, it is also planning to focus on development of environmentally friendly technology such as marine wind power generation and carbon dioxide capture and storage.

As part of these efforts, Doosan Heavy Industries acquired the 3MW marine wind power generation system international certificate in 2011 for the first time in Korea and has set up an innovative 3MW generator on Jeju Island.

It is also working on commercializing CCS, which prevents emission of greenhouse gases.

In addition to securing new projects, it will strengthen its existing businesses.

For instance, in the construction equipment field, Doosan Infracore is working to expand its local business and marketing network in Southeast Asia and Central and South America - the main axes of the market.

Overall, Doosan executives will focus on business areas and regions that are already profitable while trying to work innovation into their core values to ensure a secure future.