Broken hovercraft may be behind altered photo

Broken hovercraft may be behind altered photo

Pyongyang unveiled a puzzling photo on Tuesday of a military landing drill, apparently manipulated to show more amphibious vehicles than actually took part in the exercise.

A high-ranking Seoul official speculated that technical difficulties rendered many of the hovercraft inoperable, forcing the North to cover up the failure of their much-touted technology.

The state-run Rodong Sinmun printed a photo on its front page showing eight hovercraft, six approaching the land from sea in various stages of attack and two on the shore surrounded by some two dozen soldiers.

But The Atlantic magazine and other international media reported that several of the hovercraft in the sea seemed like digital clones given their soft edges and unusual colors and the lack of a visible wake. There was also a strange snow formation. 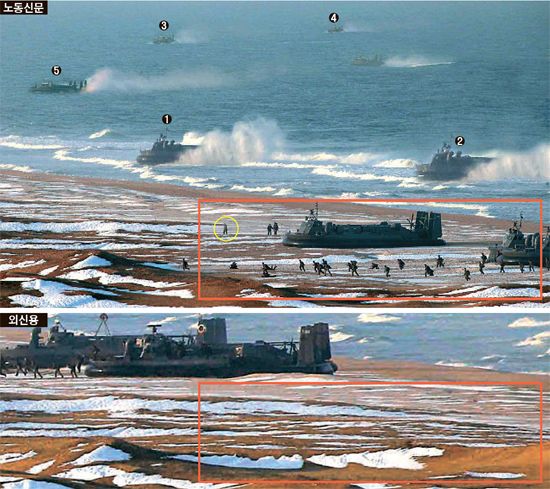 “Many of the air-cushion vehicles deployed for the drill that North Korea held on Monday malfunctioned, creating a fiasco,” the high-ranking government official told the JoongAng Ilbo yesterday. “Nearly 40 percent of the deployed hovercraft broke down and interfered with the drill.”

The cause of the failure and the number of vehicles involved have yet to be determined, the official said. South Korean defense officials estimate that North Korea has obtained roughly 130 20-ton and 35-ton hovercraft from Russia.

“As the original vehicles broke down, in order to exaggerate the scale of the drill, they may have taken images of hovercraft that landed properly and tampered with the picture,” he explained.

When the hovercraft failed, officers had to scramble to board other vehicles, he added.

South Korea was able to closely observe the drill on Monday using its surveillance network and followed preparations for the event from last month.

“Since February, North Korea has been gathering officers and equipment in Wonsan [near the East Coast] and preparing for a large-scale drill,” the defense official said, “Even in the process of preparing for the drill, important equipment has been checked for technical problems.”

This is not the first time that North Korea has been suspected of altering news photos. In December, the government reportedly removed spectators from a photograph taken at Kim Jong-il’s funeral because they were not looking at the procession.