Kaesong up and running after North cut hotline

Kaesong up and running after North cut hotline 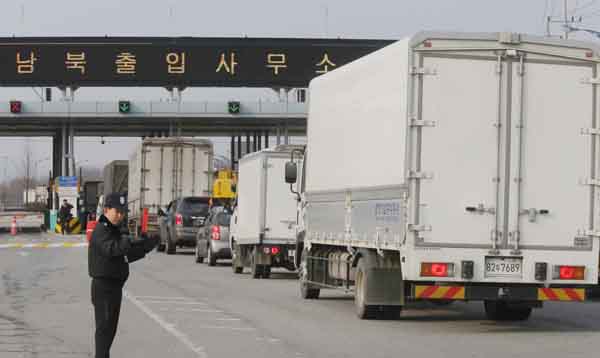 Trucks and passenger cars yesterday drive through gates for the Customs, Inspection and Quarantine Office in Paju, Gyeonggi, near the inter-Korean border, to enter the Kaesong Industrial Complex. The traffic to Kaesong was allowed yesterday though North Korea cut off all military hotlines on Wednesday. By Kim Sang-seon.

North Korea opened the Kaesong Industrial Complex to South Korean commuters yesterday, one of its major cash cows, a day after the regime cut off all military hotlines used to operate the cross-border complex.

According to the Ministry of Unification and the Blue House, a total of 424 South Korean commuters crossed the border to work at the inter-Korean business complex on three occasions - at 8:30 a.m., 9 a.m., and 9:30 a.m. - approved by North Korean authorities.

“Usually, there are about 700 to 800 South Korean workers,” a Blue House official told reporters yesterday at a closed-door meeting.

“The matter of the commuters is being handled by the Kaesong Industrial District Management Committee.”

The official said the communication between the two Koreas in regards to the cross-border complex is being conducted through “1,300 ordinary telephone lines,” in order to make international calls or fax messages.

The Kaesong Industrial District Management Committee is a multilateral organization formed by the South Korean government and the North Korean regime, as well as Hyundai Asan, located in Kaesong.

According to the Blue House and the Unification Ministry, a total of 755 South Koreans stayed at the complex yesterday, and 405 returned to the South.

“There is no drag on operating the complex at this moment,” the official said.

“So we are closely monitoring the situation, led by the Unification Ministry. President [Park Geun-hye] also ordered us to make the safety of commuters a top priority,” the official added.

Pyongyang notified Seoul on Wednesday that they had cut off all military hotlines from the east and west coasts in anger over the ongoing Seoul-Washington joint war games.

The hotlines were used for communication between the two Koreas to exchange the daily list of commuters working at the cross-border complex.

On March 12, the North disconnected five hotlines between Seoul and Pyongyang that are connected through the border village of Panmunjom, for the same reason.

It is not the first time that Pyongyang cut communications with Seoul or disrupted the operation of the complex.

In December 2008, the North restricted South Korean workers’ access to the complex for 12 days, upset by some anti-Pyongyang civic groups’ sending leaflets critical of the regime into its territory.

In March 2009, the North also cut off military channels with Seoul for 12 days, denouncing the Korea-U.S. joint military drill Key Resolve and restricted access to Kaesong for three days.

In May 2010, in protest of the so-called “May 24 sanctions” by the Lee administration, the North cut off communication lines in Panmunjom between May 26 and Jan. 12, 2011.

In the wake of the shelling on the Yeonpyeong Island in November 2010, the North also blocked access of the South Korean commuters for 27 days.

A South Korean government official told reporters that a complex shutdown is not an option for them.

According to a statistic by the Unification Ministry, the complex has a total of 123 South Korean companies and 54,234 workers that are composed of 53,448 North Koreans and 786 from the South. The annual profit that the North earned from the complex in 2012 was about $80 million, as the monthly salary for each North Korean worker was $134 on average.