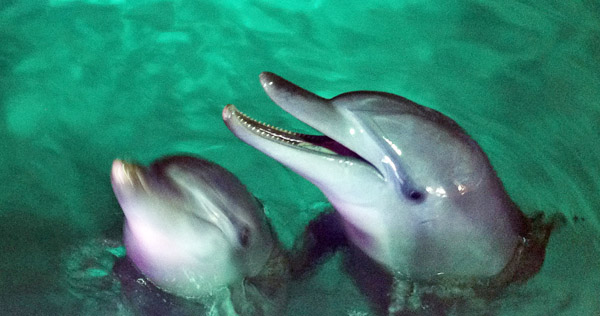 Two of the dolphins in Jeju. Provided by the United for Free Animals

Korea has been following the heartwarming case of Jedol, the 14-year-old Pacific bottlenose dolphin who will be released into the wild in June after being illegally caught and used in a dolphin show in the Seoul Grand Zoo.

Yesterday, they learned the fate of the man who bought Jedol and put him and many other dolphins into slavery as park performers. The Supreme Court ruled on his conviction yesterday - and also allowed him to walk free.

The story goes back to May 2009, when eight fishermen discovered two Pacific bottlenose dolphins caught in a net in waters off Seogwipo, Jeju. One of them was Jedol, a male, and the other was Boksun, a female.

Under the country’s fisheries law, fishermen are banned from capturing Pacific bottlenose dolphins. It is also illegal to sell or purchase them.

Mr. Heo, 53, who owns a private dolphin show in Jeju, purchased the two mammals from the fishermen for 15 million won ($13,478). In the succeeding nine months, he purchased nine more dolphins captured in the same way for 90 million won.

While Boksun and the other dolphins received training and were used at the show in Jeju, Heo traded Jedol for two sea lions in July 2009. Jedol headed to the Seoul Grand Zoo to become one of its star performers.

The fate of the 10 dolphins that remained with Heo in Jeju was unfortunate. The dolphin shows were held four to five times per day. Three dolphins died before July 2011, when the Korea Coast Guard found the eight fishermen who captured and sold the dolphins to Heo. The fisherman, Heo and one of his trainers were prosecuted.

As Heo’s case was tried and appealed, the dolphin shows continued, and three more dolphins died. In fact, the Supreme Court’s final decree came out around 2 p.m. yesterday, but the 4:30 p.m. dolphin show was still held.

The Supreme Court headed by Judge Park Bo-yeong yesterday confirmed the original verdict against Heo and his trainer. They were both sentenced to eight months in prison, although the jail time was suspended for two years. Heo was fined 10 million won. Both can walk free.

Though the court ruled that the government should confiscate the four surviving dolphins in Jeju, it’s not clear if or when they will be released. In order to be sent back to the nature, the dolphins need to pass medical tests and go through training to readapt to nature.

Kim Hyun-woo, a researcher from the National Fisheries Research and Development Institute, and staff from the Seoul Grand Zoo visited Jeju yesterday and collected blood sample to check the dolphins’ conditions. The experts said that because the mouths of two of the four dolphins are bent as a birth defect, trainers currently put feed inside their mouths directly.

The experts will decide whether the dolphins are eligible to be released within a week. If they are, they will be sent to a floating cage in Seogwipo where Jedol is undergoing his final adaptation training before his release as early as the first week of April.

“The four dolphins will first be sent to the Seoul Grand Zoo on Friday,” a spokesman of the Jeju District Prosecutors’ Office said. “They will receive training with Jedol.”