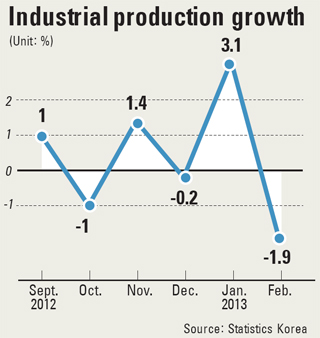 Korea’s industrial production unexpectedly fell in February, signaling that a recovery in Asia’s fourth-largest economy may be slower than expected as a weaker yen threatens exports.

Output fell 0.8 percent last month from January when it fell 1.2 percent, Statistics Korea said yesterday. The median estimate of 10 economists in a Bloomberg News survey was for a 0.3 percent gain. Production fell 9.3 percent from a year earlier, a decline partly attributable to February having fewer working days this year because of the Lunar New Year holiday.

The output decline may bolster the government’s case for a larger supplementary spending package after Finance Minister Hyun Oh-seok announced plans for stimulus on Thursday. The government cut the 2013 growth outlook from 3 percent to 2.3 percent as Korean exporters including Samsung Electronics and Hyundai Motor grapple with a won that’s risen 17 percent against the yen in the last year.

“The economy is not contracting, but there is no direction in terms of sentiment,” said Sun Yoo, economist at Woori Investment & Securities. “The yen is a concern for exports and output growth, but it is only part of a whole lot of uncertainty for Korea. There is a big chance that the Bank of Korea will cut the benchmark interest rate in April.”

Korea’s economy expanded at the slowest pace last quarter since the global recession.

The government also cut projections for the current account surplus this year to $29 billion from $30 billion, while reducing its inflation forecast to 2.3 percent from 2.7 percent.

The Bank of Korea will announce its revised 2013 economic growth forecast in second week of April, Governor Kim Choong-soo told reporters in Kuala Lumpur. Its last forecast was for 2.8 percent growth.