Park’s additional budget could be near ￦20 trillion

Park’s additional budget could be near ￦20 trillion 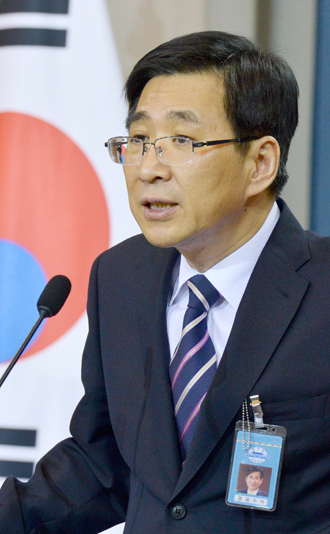 The government decided to draw up a more than 12 trillion won ($10.8 billion) supplementary budget to stimulate the economy amid growing worries it will run out of money in the second half of the year.

Analysts predict the budget will actually be around 20 trillion won - double what they were predicting just a few days ago.

The extra budget is probably going to be the second-largest in the government’s history since a 28 trillion won budget that was used to stimulate the economy in 2009 in the wake of the U.S.-triggered global financial meltdown.

But paying for it isn’t going to be easy, according to the government.

The government had planned to fill shortfalls in tax revenue with 7.7 trillion won financed through the sale of government-owned shares in the Industrial Bank of Korea and Korea Development Bank.

But it seems impossible to carry out the plan now due to unfavorable market conditions, according to Lee Suk-joon, vice minister of strategy and finance, at a briefing yesterday. He said privatization of the two banks will probably not be possible this year or the foreseeable future.

The vice minister said the additional budget will play a crucial role in preventing “Korea’s version of the ‘fiscal cliff’ [in the U.S.].”

“It is not right that the government cuts spending during a difficult time,” Lee said. “The government will try to execute its planned spending by using the supplementary budget.”

Worries about a possible fiscal cliff-type situation - in which Republicans pressed President Barack Obama to slash spending even if it hurt economic growth - also came from the Blue House.

“The government might face a situation similar to the U.S. sequester cuts in the second half of the year, if it fails to reach its tax revenue goal,” Cho said.

Because of last year’s slowdown, people’s incomes and corporations’ profits declined, leading to a 4.5 trillion won cut in tax revenues that affects this year’s government budget, Cho said. The value added tax was 1.1 trillion won less than the government predicted.

“The government’s fiscal soundness could deteriorate this year, because the former administration didn’t calculate the shortfalls in tax revenue,” Cho said. “It is inevitable to issue treasury bonds.”

However, the top economic aide to the president said the Park administration is firmly determined that there will be no tax hikes, and it will revise spending that was devised by the former government, too.

According to the government’s first economic policy package announced Thursday, it plans to save a total of 81.5 trillion won by adjusting allocation of spending items over the next five years. It will secure 53 trillion won over the period by reducing tax exemptions and deduction benefits. 134.5 trillion won is estimated to be needed for all of Park’s pledges.

On Thursday, the government cut the country’s GDP growth forecast to 2.3 percent from 3 percent. The figure excludes any positive effects of government stimulation measures.