Sunny sentiment across the board

Sunny sentiment across the board 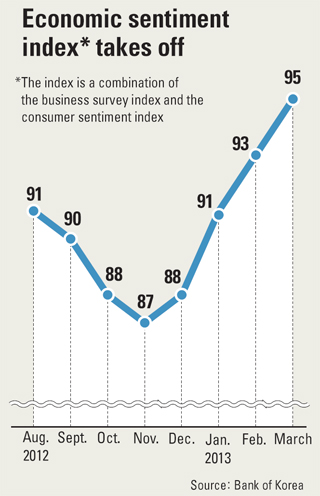 The economic sentiment index (ESI) - a hybrid of the business survey index (BSI) and the consumer sentiment index (CSI) - rose to its highest level in nine months in March, indicating that both corporate Korea and its consumers are hopeful that Asia’s fourth-largest economy will eventually escape from a sluggish economy.

According to data released by the Bank of Korea yesterday, the ESI hit 95 in March, up 2 points from February.

“The rise in ESI to its highest level in nine months is backed by improved BSI and CSI in March,” Lee Seong-ho, an official at the central bank. The BSI and CSI gauge corporate and consumers’ expectation for economic outlook.

Manufacturers’ BSI, which measures manufacturers’ outlooks for the month ahead, came in at 80 for April, up from 76 in March.

The manufacturers’ BSI that gauges the current state of business hit 78 in March, up 4 notches in February.

An index that gauges current business condition of conglomerates in manufacturing industries hit 78 in March, up 6 points. Small and medium manufacturers’ index hit 71, up 2 points.

The prospects for Korea’s exporters and domestic-demand oriented companies were divided as the former’s current business condition jumped 11 points to 82 in March and the latter’s dipped 1 point to 70 in the same period.

An index for the non-manufacturing business outlook for April jumped to 71, up two notches compared to March.

An index that measures non-manufacturers’ current business conditions came to 68, up 3 points.

An index that concerns the financial status of manufacturers rose to 85 in March, up 2 points.

Manufacturers’ pointed to sluggish domestic demand as the No. 1 business obstacle (23.5 percent), followed by uncertainty of economic conditions (20.3 percent) and the foreign exchange rate (9.4 percent).

The CSI, which the BOK released earlier this week, rose to its highest level in 10 months in March to reach 104.

The BOK said this was a sign that Korean consumers are regaining confidence and household spending will grow.