A juicy excuse to get out of the city

A juicy excuse to get out of the city 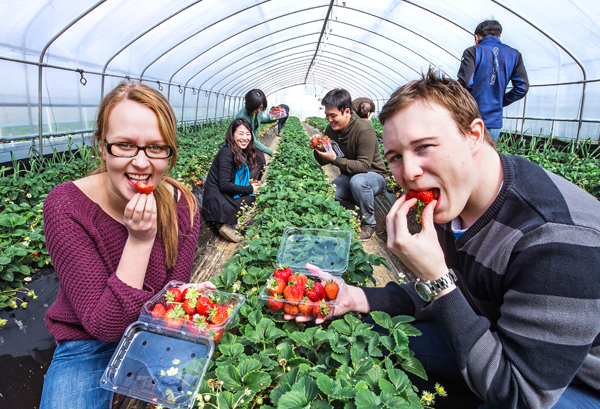 Tulia (left) and her boyfriend Quentin, both from the United Kingdom, try out the strawberries they picked at Daega Farm in Namyangju, Gyeonggi. [JoongAng Ilbo]

Strawberry greenhouses have emerged as the new hotspots for family picnics in Korea. After the long, bleak winter, just taking in the strawberry-strewn scene can wash away those winter blues.

Owners of strawberry greenhouses have been offering programs for several years now. For city people - especially city kids - it’s a rare opportunities to get up close and personal with nature.

The popular weekly reality show “1 Night, 2 Days,” where a group of celebrities go on a trip together, visited a strawberry farm recently in Sacheon, North Gyeongsang. A visit from such a show is a boon for the filming locations, as they often become popular tourist destinations soon after the show airs. The production team has also released a series of tourism publications based on the show.

At the recommendation of the agriculture policy department of Gyeonggi Provincial Government, the JoongAng Ilbo also visited a strawberry greenhouse in Namyangju. It’s in Gyeonggi, which is the province that surrounds Seoul and is home to a number of strawberry farms. Its proximity to the capital makes it a favorite destination for Seoulites looking for a short but sweet getaway over the weekend.

Strawberry farmers say that greenhouse strawberries are tastiest in March. But more often than not, people start flocking out to berry farms starting in April, when the weather really starts to warm up. Although prices vary, usually around 30,000 won ($26.90) will get you the chance to pick your own berries, eat your fill and make jam with what’s left.

Strawberries start to get more and more popular as the spring turns into summer.

Many Koreans in their 50s have fond memories of going on group blind dates to strawberry farms in their younger days as the weather heated up and the berries started to get juicy.

But with the introduction of the greenhouse technology, strawberries have now become the fruit that signals the arrival of spring.

Strawberries are actually an aggregate accessory fruit, which means that the delicious part comes from the receptacle that contains the ovaries of the plant rather than the ovaries themselves. Forty days after the flowers bloom on strawberry plants, they start to bear fruit. The colder it is, the longer it takes for the fruit to ripen. And the longer it takes to ripen, the sweeter they get. That’s why the strawberries picked in March, after the freezing winter days, are the sweetest and juiciest.

We visited Daega Farm in Namyangju, Gyeonggi. It’s operated by a married couple - 58-year-old Lee Seong-jun and Jang Bok-sun, who’s 51 - who have been growing organic produce for over 30 years. The strawberry programs take place in their seven greenhouses, each one of which measures 660 square meters (7,104 square feet). Up to 120 people can fit in one greenhouse.

“Strawberries that have a stalk that’s leaning slightly backward are the tasty ones,” Jang explained to the visitors.

The couple normally accepts families on the weekend, and group tours on weekdays.

As we entered the greenhouse, it instantly felt like summer. The temperature inside was a balmy 25 degrees Celsius (77 degrees Fahrenheit), far warmer than outside, and you started to heat up as soon as you stepped inside. After a half hour of picking strawberries, you definitely get a bit sweaty.

Escape from the city

“These days, young parents bring their children to these strawberry farms,” the couple said.

All told, a trip takes about half a day on the weekend and provides an opportunity to spend quality time with you kids, eat strawberries to your hearts’ content and have a pleasant getaway from the urban life. For city kids, who usually only encounter strawberries in packages on store shelves, just getting a glimpse at a farm is itself educational.

It’s not just Korean families who are opting to spend their free time on the country’s strawberry farms these days.

Tourists on trips here - particularly from Southeast Asia - are frequent farm visitors as well. Because strawberries grow in low temperatures, they’re a rarity in Southeast Asia and even if you can find them, they aren’t that great. The sweet, juicy variety that grow here are an interesting tasty treat.

But of all the visitors, it’s the kids who have the most fun. As they spend most of their time indoors during the winter, running around barefoot in the dirt is a great way to get some exercise and is also just pure, unadulterated fun. Also, strawberries are just the right size for their little hands to pick.

“I was here a few years ago, so I know how to find ripe strawberries,” 11-year-old Choi Hyeon-seo boasted as she located a perfect specimen amidst the green leaves. Grasping it with her fingers, she gingerly twisted it off the plant and placed it in her box. Participants filled their 500-gram plastic containers in no time. They also filled their stomachs.

The jam-making is up next. After removing the stalks from the strawberries and washing them, you put them in a large sot, a traditional Korean cast iron caldron. You add sugar and boil them down for 30 minutes. As it boils, all you have to do is give the mixture a stir with a big paddle every once again. And then, voila - your very own strawberry jam.

Most of the strawberry farms in the Gyeonggi area run their programs until early June. The picking, jam-making and a meal will usually run you 30,000 won for adults and 20,000 won for kids.