Last year, a 47-year-old man surnamed Lee borrowed 10 million won ($8,898) from a local bank to start his own business. Although Lee had a relatively low credit rating - 7 out of 10 - he was able to clinch the loan with a 4.5 percent annual interest rate without collateral because it was a microcredit loan, which are for borrowers with low credit ratings and low incomes.

Lee didn’t miss a single payment of either principal or interest until early this year when he learnt about the much-touted “people’s happiness fund,” an initiative of the Park Geun-hye administration to lessen the burden of debt on the relatively poor. Some people will have large chunks of their debt written off by the government, especially if they’re behind on their payments.

Lee told the bank he was stopping payments to become a beneficiary. 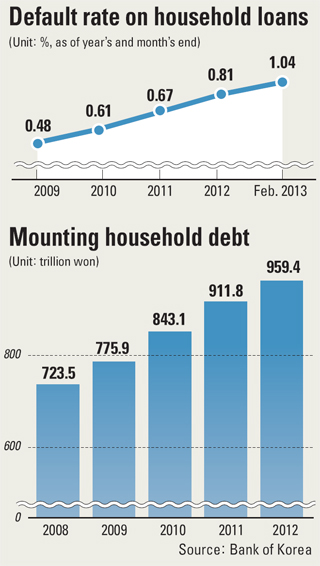 Bahk also holds the position as the first director of the fund.

“The people’s happiness fund is one of the core policies of the Park Geun-hye administration to help those debtors with the will for rehabilitation to get back on their feet with hope,” Chung said. “It is important for the government to help ordinary people recover tomorrow’s dreams by breaking out of a vicious cycle of falling incomes and rising household debt.”

The people’s happiness fund is supposed to write off overdue debts owed by low-income households by up to 70 percent. The target group for the fund are debtors who have borrowed less than 100 million won from financial institutions and who have been in arrears for more than six months as of the end of February. As of Thursday, of 4,121 financial institutions, 97 percent have applied to take part in the fund, according to the FSS.

Despite the government’s ambitious plan, however, concerns have been raised over the moral risks the fund can bring, such as can be seen in the case of Lee.

According to data released by the FSS Thursday, the household loan default rate by local banks reached 1.04 percent as of end of last month, which is a 0.05 percentage point increase from the previous month. The figure is the highest in six years and four months when the default rate reached 1.07 percent in October 2006. Analysts blame the slow economy, frozen real estate market - and also the launch of President Park’s people’s happiness fund.

“There is an increasing number of customers who are not currently targets of the happiness fund but expect similar measures to come out from the government,” said a bank executive. “Even if they are able to repay the principal and interest on their loans, they’re refusing to pay back thinking that one day the government will write off the debt for them.”

Lim Jin, a researcher at the Korea Institute of Finance, echoed the sentiment. “The government should analyze in details the targets of the fund,” he said, “so people who are in need of having their debt written off are given the benefit while those with the ability to repay are excluded.

“The government should also send a concrete message to the people that there will be no more debt exemption to avoid moral hazard,” Lim said.