Korean adoptee reaches out to her motherland

Korean adoptee reaches out to her motherland 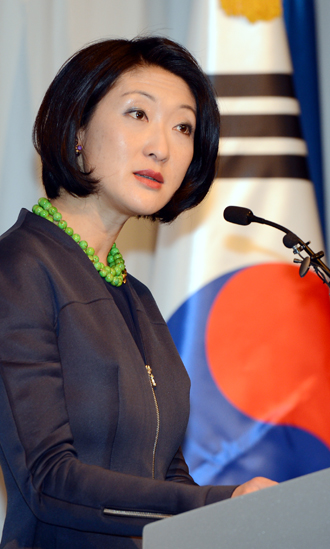 Fleur Pellerin, a Korean adoptee who is now a minister delegate in France, speaks at a special lecture hosted by the French Korea Chamber of Commerce and Industry on Monday. [NEWSIS]

Fleur Pellerin, Minister Delegate for Small and Medium-Sized Enterprises, Innovation and the Digital Economy of the French government, said she will boost bilateral partnership between France and South Korea, particularly in digital and innovation sectors, during her first visit to her homeland that she left as an adopted child about 40 years ago.

With her fascinating history as an adopted Korean-native child to France, Pellerin visited South Korea on March 23 for her 5-day-long business trip, for the first time since she was born in Seoul in 1973 and adopted by a French family six months later.

As one of her main duties during the trip, Pellerin attended the luncheon by the French Korean Chamber of Commerce and Industry. There, Kim Ki-mun, the chairman of the Korean Federation of Small and Medium Business, or KBiz, and his counterpart of the chamber, David-Pierre Jalicon, signed an MOU to establish a strategic partnership between the two countries in developing small and medium-sized companies.

“I am delighted by the partnership that the Chamber is signing today with KBiz,” she said in her speech at the luncheon held at the Novotel Ambassador Gangnam, on March 25. “I am sure it will provide new relationships and opportunities for small and medium enterprises (SMEs) that need them.

Known as a point woman of the French government in boosting the country’s business and attracting foreign investment, Pellerin said Korea is “a priority.”

“It is clear that both of our countries share many assets and priorities, for instance in areas such as innovation and the digital field, where Korea has been one of the most successful countries in the world,” she said. “To explain our actions, I have programmed a series of international travel, and naturally Korea was a priority.”

However, she mentioned that the bilateral trade between the two countries has been “thriving,” with at least 250 French companies in diverse sectors in Korea. Some major Korean conglomerates are also active in France, she explained, such as STX Corporation’s recently-acquired shipping yard or Samsung’s new R&D center.

While developing the commercial ties with South Korea, she said her other mission is changing the traditional cliche about France’s national image as a top tourist and artistic destination into one of the world’s top business-friendly regions.

“I know some of you believe France is a great destination for tourism, for its cafes, its lunches, its tradition and museums,” she said. “But less so that it is one of the best places in the world to develop a business.”

For the newly-launched partnership between the two countries, she said the French Chamber of Commerce will organize a joint seminar in May in Paris.

“In France today, there are many young and promising companies, many excellent teams in research labs, large companies or universities,” she said. “The effervescence of our digital field will be showcased during the Franco-Korean seminar.”

As an icon of a successful adopted child, the minister grabbed public attention not only in France but in Korea as well. At the age of 17, she entered the prestigious ESSEC Business School, and graduated from the Ecole Nationale d’Administration, a state-run administration school in France. After that, she started her career as a high-ranking government official at France’s National Court of Audit, specializing in the economics and digital sectors.

After entering the Socialist Party in 2006, she became an aide to then-presidential candidate Francois Hollande in 2012, as an architect for his pledges for business and digital economy.

When asked about her personal story as an adoptee, she said she had no “resentment” against Korea that she left.

“I have no memories as I came just six months after I was born,” she said. “I was a happy child raised by great French family. I don’t have any resentment toward this country.

When asked how Korea should improve its national image, she said Korea will be able to utilize the so-called Korean Wave, the cultural power of the country, represented by its movies and pop songs.

“It’s a good opportunity right now, not only Psy but the Korean movie industry is well known in Europe and the United States,” she said. “Korea should use this market power in arts and to promote its way of living.”

Pellerin also visited a series of Korea’s renowned conglomerates, such as Samsung, as well as the so-called “smart city” of Songdo.

“I know I’m very popular here,” she said, laughing. “I’m sure this can be an asset to increase the bilateral relationship between France and Korea.”