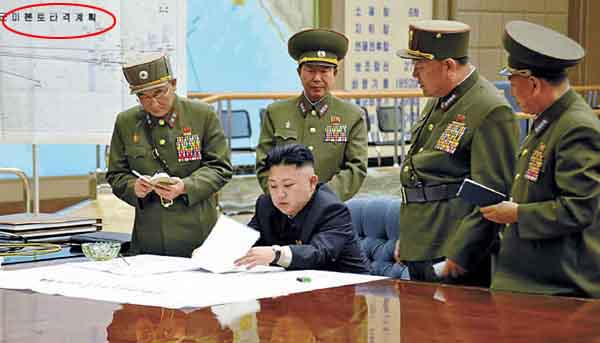 After two nuclear-capable American B-2 stealth bombers conducted their first-ever firing drill over the Korean Peninsula, North Korean leader Kim Jong-un ordered yesterday troops to “stand by for firing rockets” at the U.S. mainland and its overseas bases, including those in South Korea.

Kim convened “an urgent operation meeting” with high-ranking officials, the North’s official Korean Central News Agency reported, at around midnight yesterday, an unusual time for the leader to conduct a meeting.

The agency said Kim signed off on a final plan for “technical preparations for launching rockets” and ordered troops to “stand by for firing [rockets] so that our rockets could strike the U.S. mainland and its imperialistic bases in Hawaii, Guam and others in South Korea at any time.”

The report said the order was in response to the U.S. military’s B-2 stealth bomber drills over South Korea, which they considered very provocative. 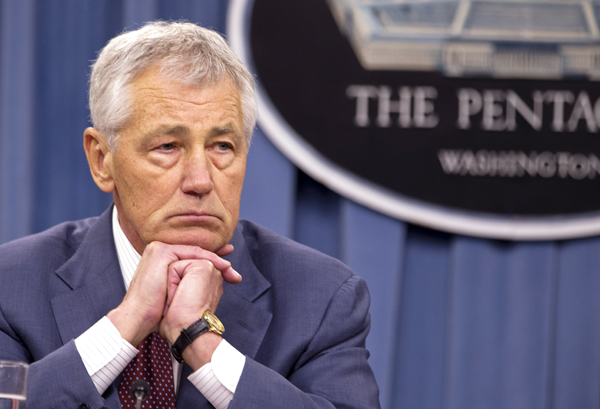 “The dispatch of the strategic stealth bomber B-2 aircraft over South Korean skies once again shows that hostile U.S. acts against the DPRK [North Korea] go beyond a simple menace and have entered the phase of reckless acts,” it said.

Hours after the report, a source from the South Korean military told Yonhap News Agency that the military detected “increased activities of vehicles and troops at the units of medium- and long-range missiles” and they are eyeing the possibility of a missile launch by the North.

“Since March 26, the regime has put its troops at the so-called ‘combat readiness posture No.1’ [the highest alert] so there is a possibility that they could indeed launch [a missile],” the source said.

The North’s propaganda Web site Uriminzokkiri also posted a video yesterday showing a simulation animation in which a U.S. B-52 is intercepted by a North Korean missile.

“The B-52 can technically carry about 20 nuclear missiles and strike a metropolitan city ten times,” the video clip said.

“It is not a nuclear umbrella [for South Korea],” the clip said, “but a horrific nuclear shower on South Korea by the U.S.”

“The intelligence authorities of South Korea and U.S. are closely supervising whether there is any preparation by North Korea to launch its short, medium and long-range missiles,” he said.

However, Kim also suspected the announcement for an operational order by Kim could just be saber-rattling in order to gain more bargaining chips in negotiation with South Korea and the United States.

“In general, an operational order is conducted secretly,” he said. “But he made it public and let everyone know, which I assume could be part of psychological warfare.”

On Tuesday, the North Korean military ordered all its artillery units, including strategic rocket and long-range artillery units, to adopt the highest alert to strike the continental U.S., its overseas bases and South Korea, in retaliation against the B-52’s sortie over the Korean Peninsula.

The dispatch of the nuclear bombers was part of a two-month Seoul-Washington joint military exercise Foal Eagle that started March 1.

Angered by the joint war games, North Korea has also cut off all military hotlines between Seoul and Pyongyang, which were used to communicate details about commuters working at the Kaesong Industrial Complex.

U.S. Defense Secretary Chuck Hagel said at a daily briefing on Thursday in the Pentagon that North Korea’s provocations are taken “very seriously” by the U.S. He also explained that the joint Seoul-Washington war game is just an annual exercise.

“Those exercises are mostly to assure our allies that they can count on us to be prepared and to help them deter conflict,” he said.